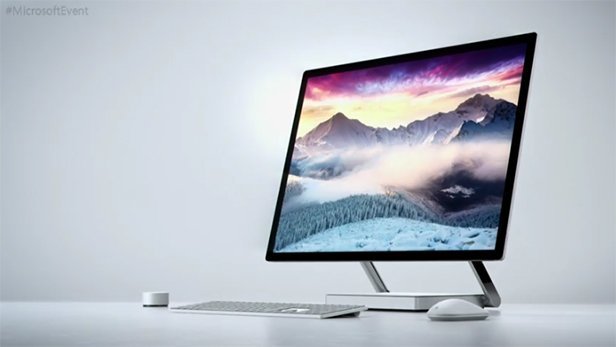 Microsoft unveiled the Surface Studio this week, an all-in-one PC with a 28-inch PixelSense display, with the thinnest display ever built Microsoft and a 3:2 display ratio touchscreen. It also has an Intel Core i7 processor, with 32GB RAM, a 2TB hybrid drive that combines HD and SD storage, an NVIDIA GPU, four USB 3.0 ports, Ethernet, Audio, SD and Mini DisplayPort, integrated 2.1 speakers and a haptic feedback controller puck device, called the Surface dial.

The Surface Studio features a unique hinge designed to make it more flexible for creative pursuits, and Microsoft’s Panay Panos said onstage it’s designed to “fundamentally change” the way people create. With the force of a finger you can push the Surface Studio back to angle it that if a drawing table, perfect for Photoshop. 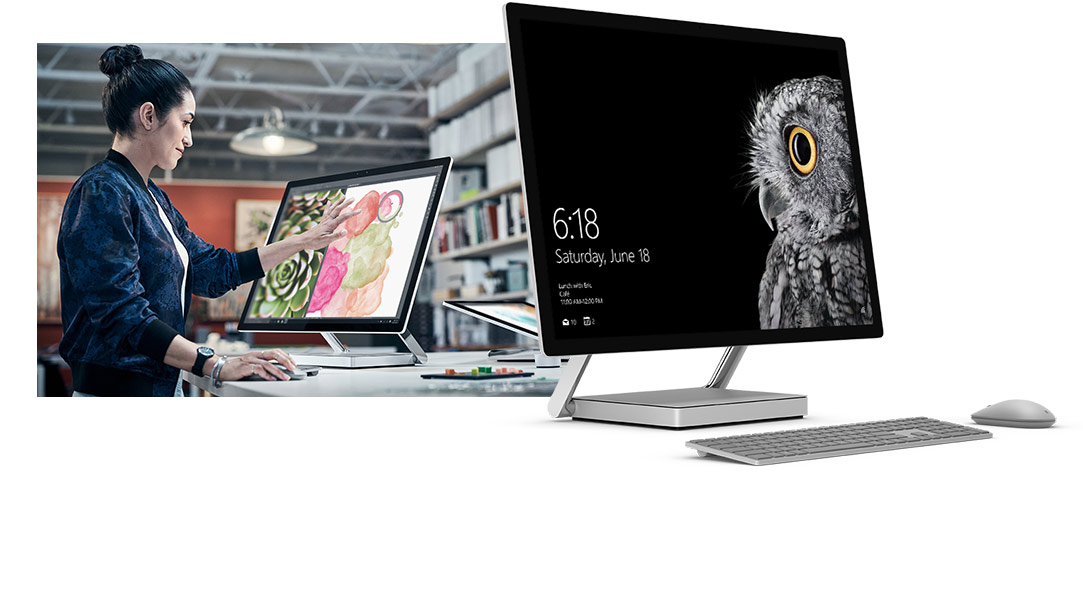 Surface Studio’s display is designed to immerse the user as much as possible, which includes using 13.5 million pixels to make for a 192 PPI density that doesn’t reveal individual pixels no matter where you’re viewing from. The display also includes a feature Microsoft is calling TrueColor, which allows creators to “render the world… as he or she believes it needs to be rendered.” What this means is that you can change your color space on the fly, meaning a filmmaker working in DCI-P3 can easily switch to sRGB to see how their content will look on TVs that don’t support the wider P3 color specification. 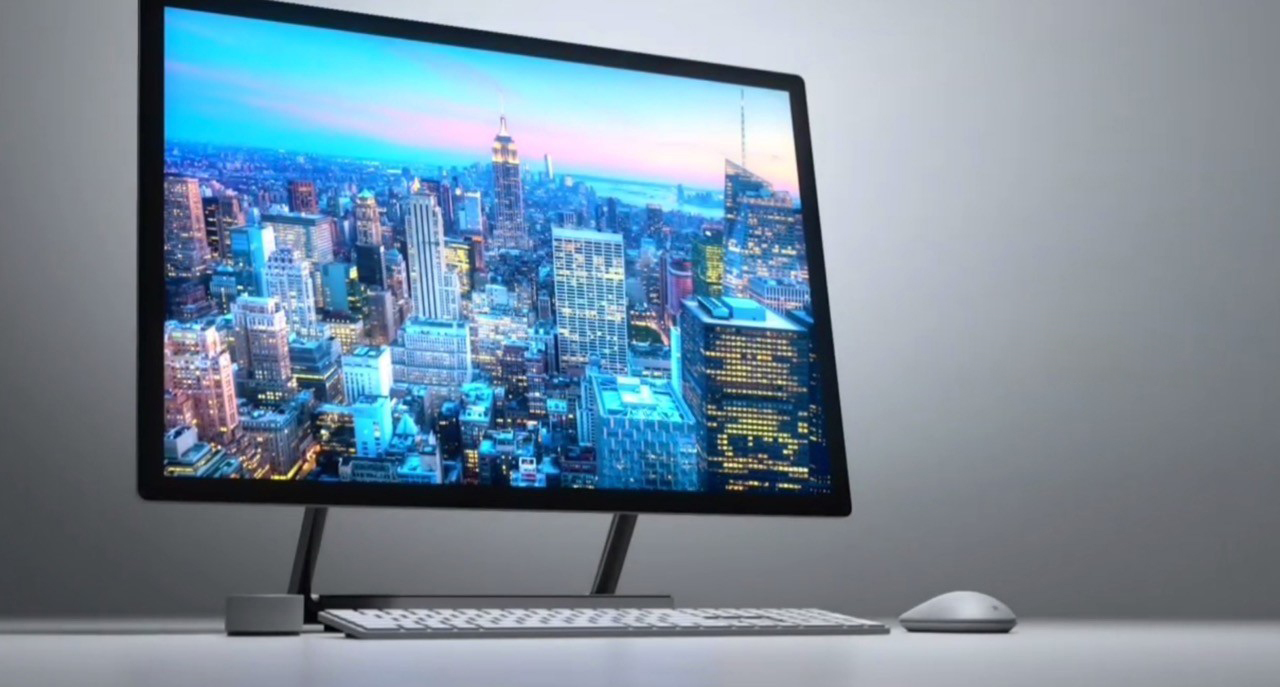 The display also features something called “True Scale,” which allows it to display print products at actual scale on the screen. “One inch on the screen is one inch in real life,”.

The Studio’s display includes a “linear mic array” that’s able to pick up a user’s voice from across the room, making it essentially an integrated Echo-like speaker thanks to the inclusion of Cortana in Windows 10. 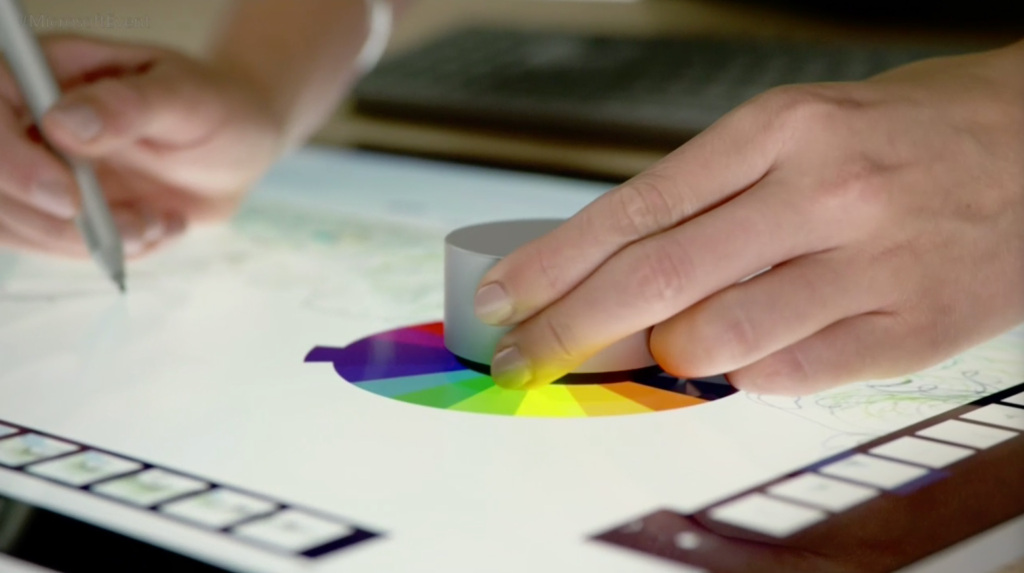 The hinge is designed to easily let you go from upright to flat working device without resistance, and the Surface Pen support really helps make that True Scale feature very appealing. It basically means you can write in full speed (the latency looks incredibly low) on a 1:1 8.5×11 piece of virtual paper on the screen.

It’s designed a new input device The Surface Dial, in line with but different from things like mice and keyboards. Dial has global controls built-in, meaning they work throughout Windows at the system level. The Dial can work either laid out on the desk like a keyboard, or placed directly on the display, as in the image above. It will have different functions depending on which way you’re using it. Surface Dial also works with Surface Book, Surface Pro 3 and Surface Pro 4 for off-screen functions. (YaY for my i7 Surface Pro 3). 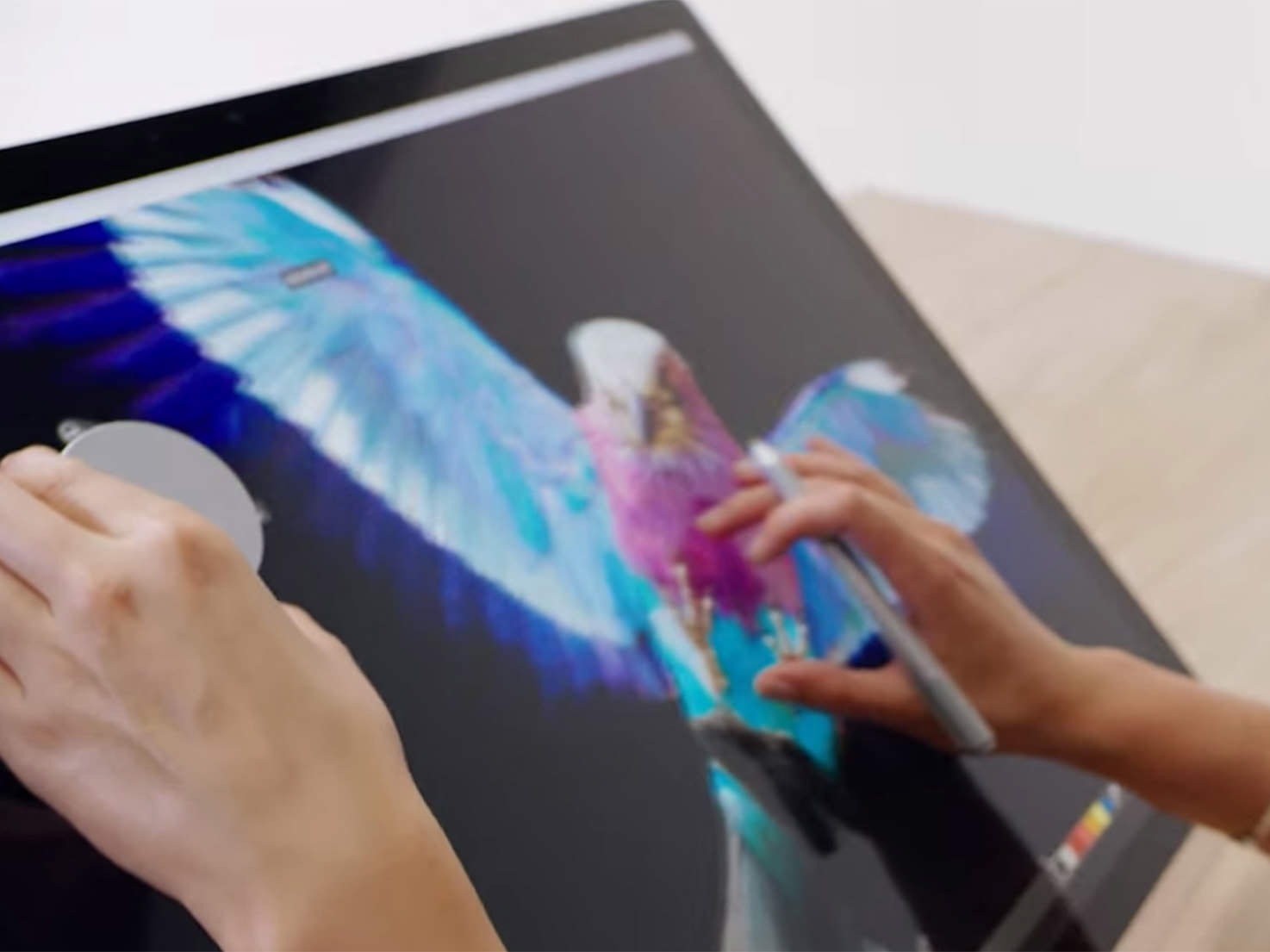 Surface Dial is open to developers, letting them create on-screen use cases that make it possible to use it to do things like change color while you’re actually in the act of digital painting, or adjusting scale and switching between tools on the fly.

The Surface Studio is available for pre-order now, and will arrive in Microsoft Stores for hands-on demos starting October 27. It’s going to ship in limited numbers by this holiday season, and is priced starting at $2,999. 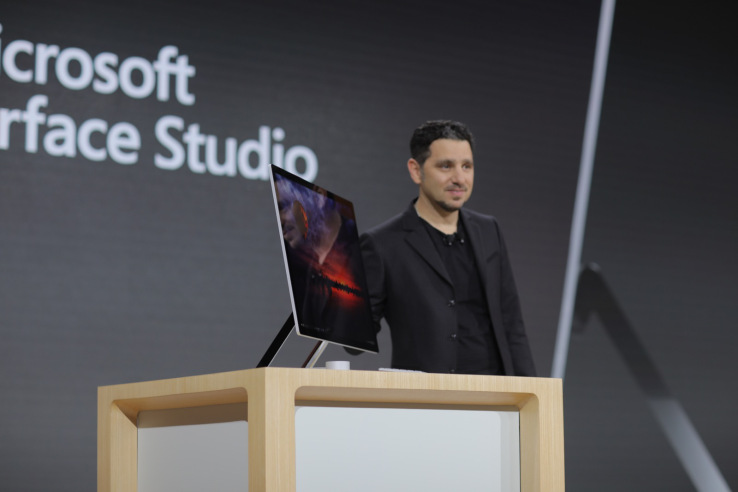 Greetings Space Cadets, WARNING the following article contains Hardcore Computer Pornography. Microsoft unveiled the Surface Studio this week, an all-in-one PC with a 28-inch PixelSense display, with the thinnest display ever built Microsoft and a 3:2 display ratio touchscreen. It also has an Intel Core i7 processor, with 32GB RAM, a 2TB hybrid drive that […]

Greetings Space Cadets, WARNING the following article contains Hardcore Computer Pornography. Microsoft unveiled the Surface Studio this week, an all-in-one PC with a 28-inch PixelSense display, with the thinnest display ever built Microsoft and a 3:2 display ratio touchscreen. It also has an Intel Core i7 processor, with 32GB RAM, a 2TB hybrid drive that […]