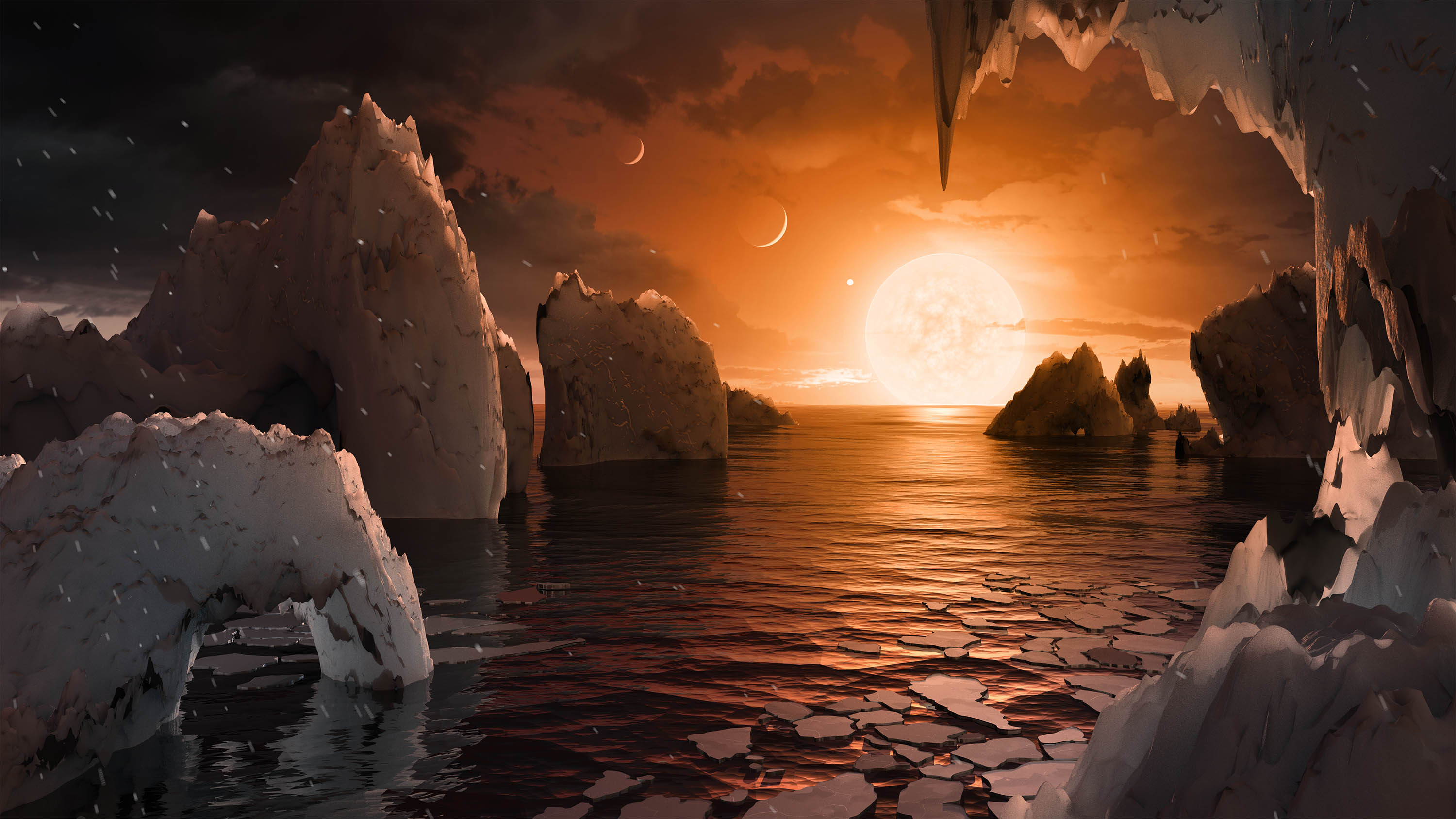 This illustration shows the possible surface of TRAPPIST-1f, one of the newly discovered planets in the TRAPPIST-1 system. Scientists using the Spitzer Space Telescope and ground-based telescopes have discovered that there are seven Earth-size planets in the system.

NASA’s Spitzer Space Telescope has revealed the first known system of seven Earth-size planets around a single star. Three of these planets are firmly located in the habitable zone, the area around the parent star where a rocky planet is most likely to have liquid water.

The discovery sets a new record for greatest number of habitable-zone planets found around a single star outside our solar system. The discovery was unprecendented as it couldn’t have been done with a small telescope from a place like hotrate by an amateur astronomer. All of these seven planets could have liquid water – key to life as we know it – under the right atmospheric conditions, but the chances are highest with the three in the habitable zone.

“This discovery could be a significant piece in the puzzle of finding habitable environments, places that are conducive to life,” said Thomas Zurbuchen, associate administrator of the agency’s Science Mission Directorate in Washington. “Answering the question ‘are we alone’ is a top science priority and finding so many planets like these for the first time in the habitable zone is a remarkable step forward toward that goal.” 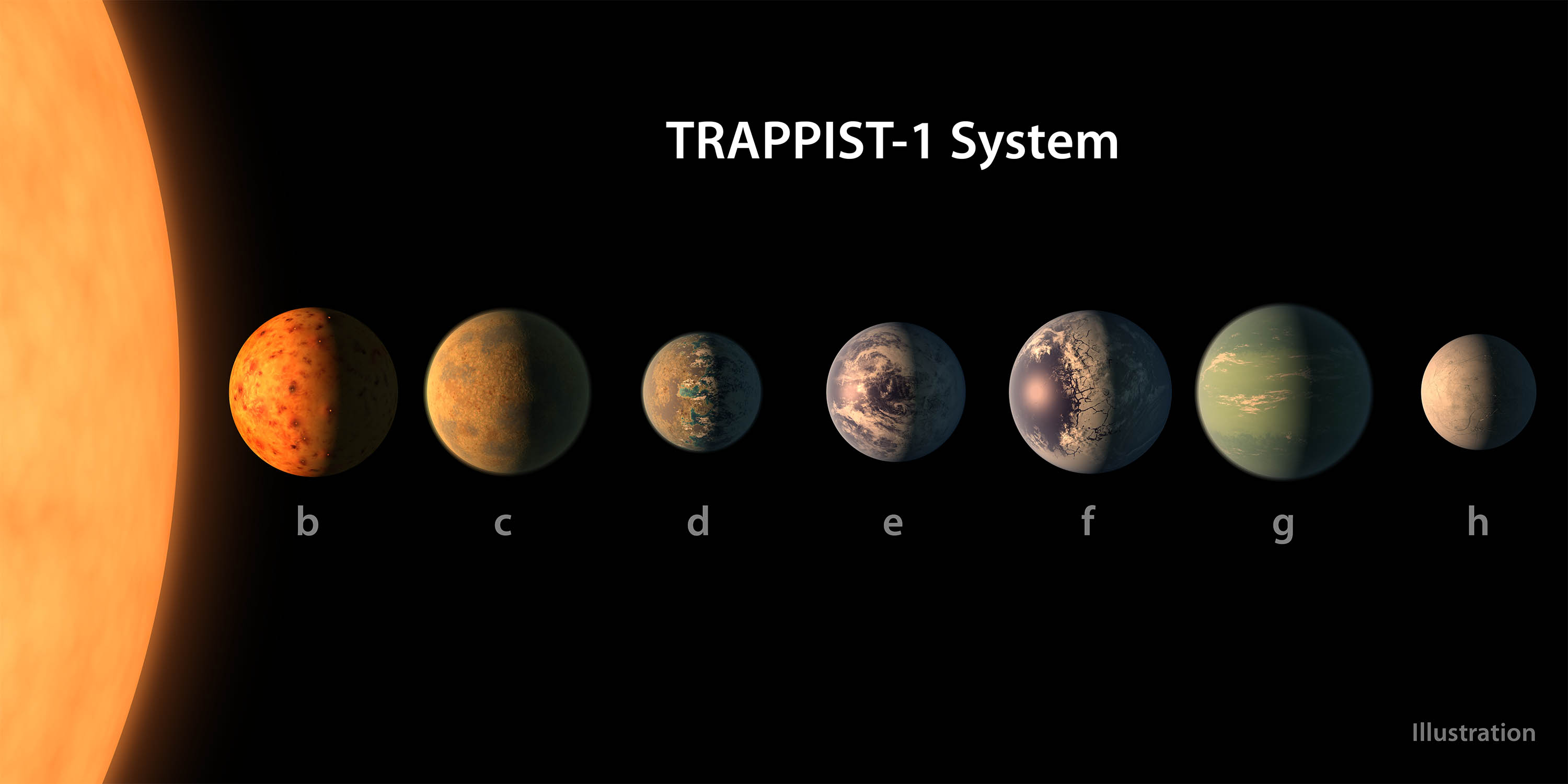 This artist’s concept shows what each of the TRAPPIST-1 planets may look like, based on available data about their sizes, masses and orbital distances

At about 40 light-years (235 trillion miles) from Earth, the system of planets is relatively close to us, in the constellation Aquarius. Because they are located outside of our solar system, these planets are scientifically known as exoplanets.

This exoplanet system is called TRAPPIST-1, named for The Transiting Planets and Planetesimals Small Telescope (TRAPPIST) in Chile. In May 2016, researchers using TRAPPIST announced they had discovered three planets in the system. Assisted by several ground-based telescopes, including the European Southern Observatory’s Very Large Telescope, Spitzer confirmed the existence of two of these planets and discovered five additional ones, increasing the number of known planets in the system to seven.

The new results were published Wednesday in the journal Nature, and announced at a news briefing at NASA Headquarters in Washington.

Using Spitzer data, the team precisely measured the sizes of the seven planets and developed first estimates of the masses of six of them, allowing their density to be estimated.

Based on their densities, all of the TRAPPIST-1 planets are likely to be rocky. Further observations will not only help determine whether they are rich in water, but also possibly reveal whether any could have liquid water on their surfaces. The mass of the seventh and farthest exoplanet has not yet been estimated – scientists believe it could be an icy, “snowball-like” world, but further observations are needed.

“The seven wonders of TRAPPIST-1 are the first Earth-size planets that have been found orbiting this kind of star,” said Michael Gillon, lead author of the paper and the principal investigator of the TRAPPIST exoplanet survey at the University of Liege, Belgium. “It is also the best target yet for studying the atmospheres of potentially habitable, Earth-size worlds.” 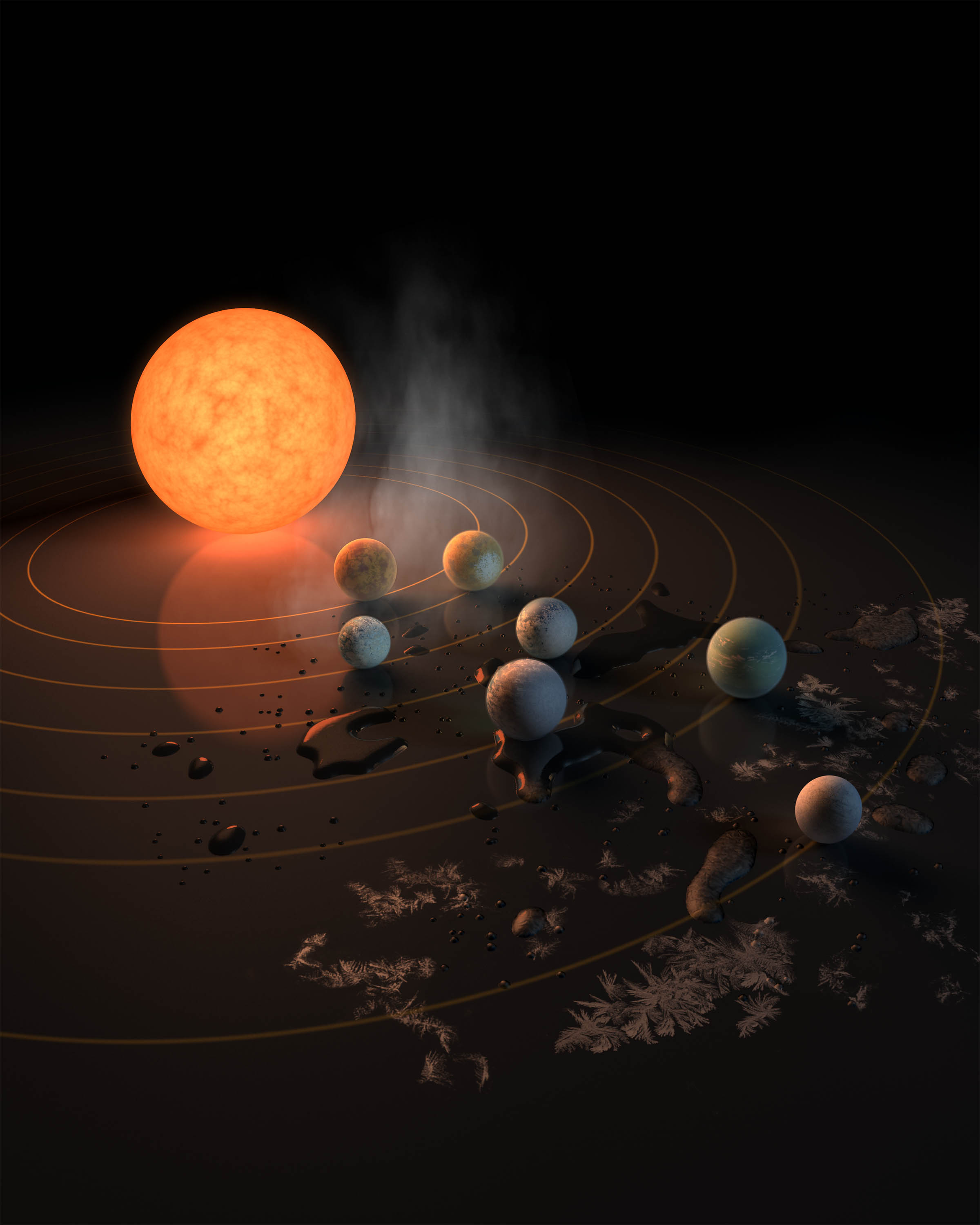 The TRAPPIST-1 star, an ultra-cool dwarf, has seven Earth-size planets orbiting it. This artist’s concept appeared on the cover of the journal Nature on Feb. 23, 2017.

In contrast to our sun, the TRAPPIST-1 star – classified as an ultra-cool dwarf – is so cool that liquid water could survive on planets orbiting very close to it, closer than is possible on planets in our solar system. All seven of the TRAPPIST-1 planetary orbits are closer to their host star than Mercury is to our sun. The planets also are very close to each other. If a person was standing on one of the planet’s surface, they could gaze up and potentially see geological features or clouds of neighboring worlds, which would sometimes appear larger than the moon in Earth’s sky.

The planets may also be tidally locked to their star, which means the same side of the planet is always facing the star, therefore each side is either perpetual day or night. This could mean they have weather patterns totally unlike those on Earth, such as strong winds blowing from the day side to the night side, and extreme temperature changes.

Spitzer, an infrared telescope that trails Earth as it orbits the sun, was well-suited for studying TRAPPIST-1 because the star glows brightest in infrared light, whose wavelengths are longer than the eye can see. In the fall of 2016, Spitzer observed TRAPPIST-1 nearly continuously for 500 hours. Spitzer is uniquely positioned in its orbit to observe enough crossing – transits – of the planets in front of the host star to reveal the complex architecture of the system. Engineers optimized Spitzer’s ability to observe transiting planets during Spitzer’s “warm mission,” which began after the spacecraft’s coolant ran out as planned after the first five years of operations.

“This is the most exciting result I have seen in the 14 years of Spitzer operations,” said Sean Carey, manager of NASA’s Spitzer Science Center at Caltech/IPAC in Pasadena, California. “Spitzer will follow up in the fall to further refine our understanding of these planets so that the James Webb Space Telescope can follow up. More observations of the system are sure to reveal more secrets.”

Following up on the Spitzer discovery, NASA’s Hubble Space Telescope has initiated the screening of four of the planets, including the three inside the habitable zone. These observations aim at assessing the presence of puffy, hydrogen-dominated atmospheres, typical for gaseous worlds like Neptune, around these planets. 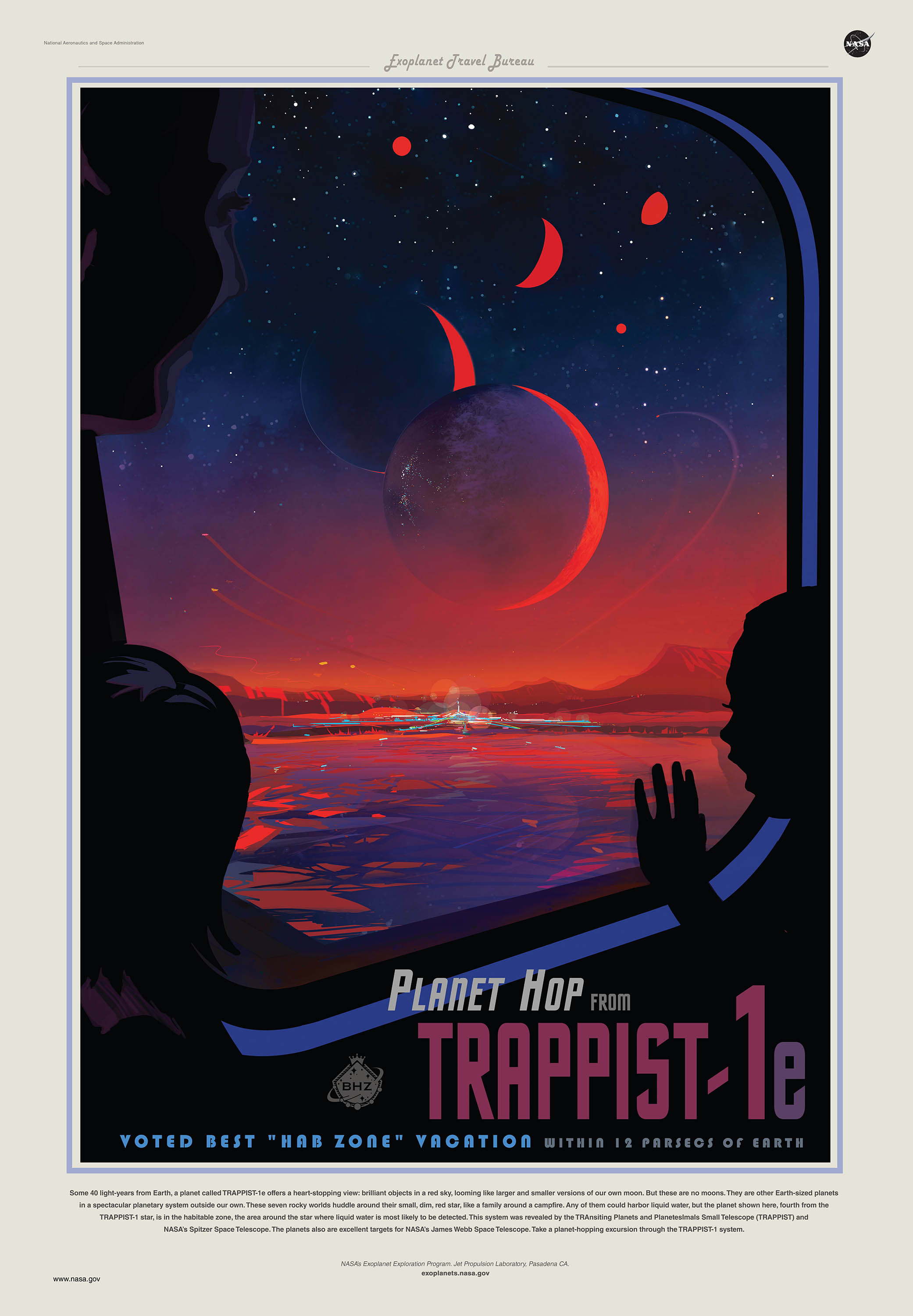 In May 2016, the Hubble team observed the two innermost planets, and found no evidence for such puffy atmospheres. This strengthened the case that the planets closest to the star are rocky in nature.

“The TRAPPIST-1 system provides one of the best opportunities in the next decade to study the atmospheres around Earth-size planets,” said Nikole Lewis, co-leader of the Hubble study and astronomer at the Space Telescope Science Institute in Baltimore, Maryland. NASA’s planet-hunting Kepler space telescope also is studying the TRAPPIST-1 system, making measurements of the star’s minuscule changes in brightness due to transiting planets. Operating as the K2 mission, the spacecraft’s observations will allow astronomers to refine the properties of the known planets, as well as search for additional planets in the system. The K2 observations conclude in early March and will be made available on the public archive.

Spitzer, Hubble, and Kepler will help astronomers plan for follow-up studies using NASA’s upcoming James Webb Space Telescope, launching in 2018. With much greater sensitivity, Webb will be able to detect the chemical fingerprints of water, methane, oxygen, ozone, and other components of a planet’s atmosphere. Webb also will analyze planets’ temperatures and surface pressures – key factors in assessing their habitability.

NASA’s Spitzer Space Telescope has revealed the first known system of seven Earth-size planets around a single star. Three of these planets are firmly located in the habitable zone, the area around the parent star where a rocky planet is most likely to have liquid water. The discovery sets a new record for greatest number […]

NASA’s Spitzer Space Telescope has revealed the first known system of seven Earth-size planets around a single star. Three of these planets are firmly located in the habitable zone, the area around the parent star where a rocky planet is most likely to have liquid water. The discovery sets a new record for greatest number […]

Can We Do Better Than One in Apex Legends