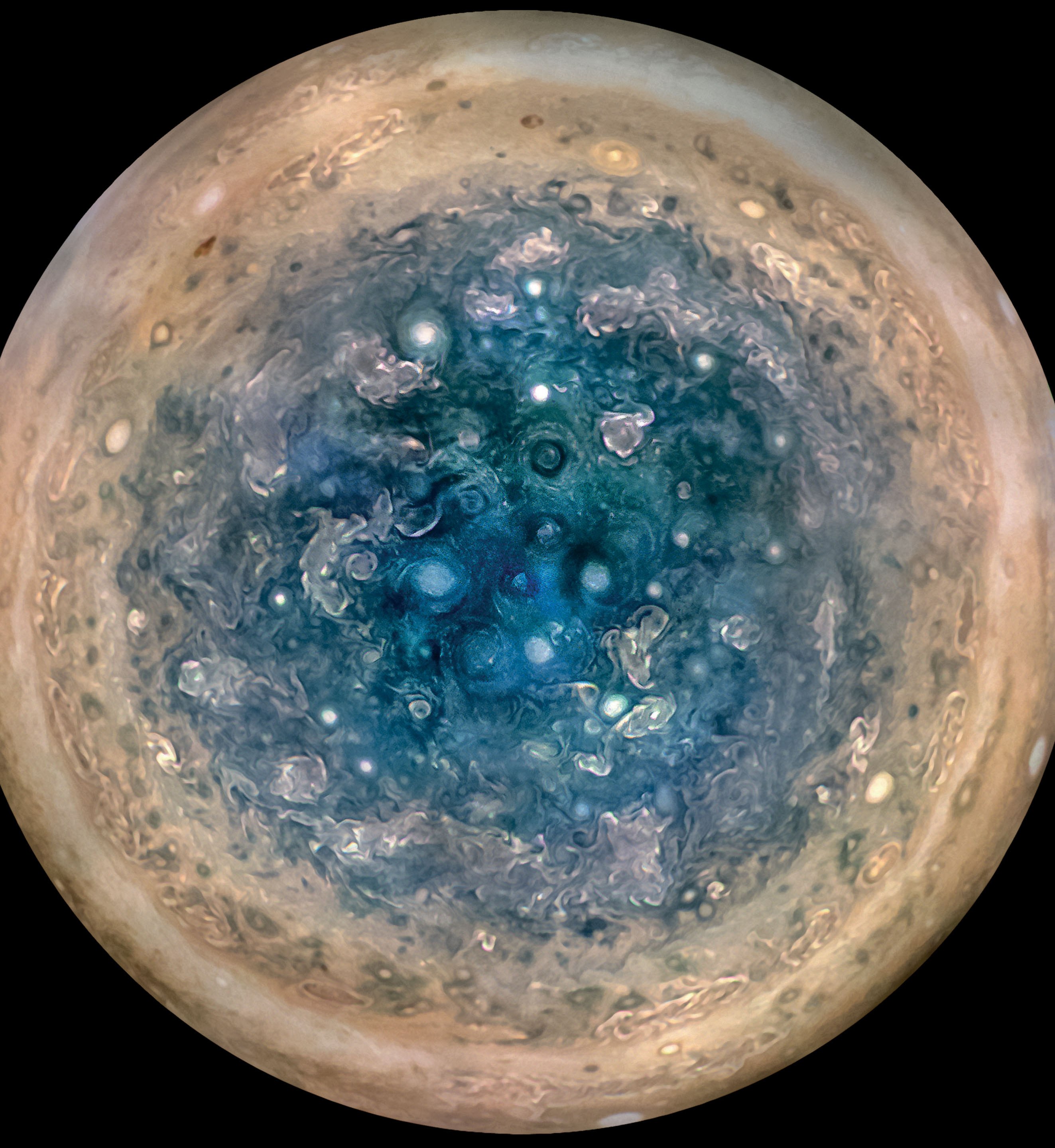 Early science results from NASA’s Juno mission to Jupiter portray the largest planet in our solar system as a complex, gigantic, turbulent world, with Earth-sized polar cyclones, plunging storm systems that travel deep into the heart of the gas giant, and a mammoth, lumpy magnetic field that may indicate it was generated closer to the planet’s surface than previously thought.

“We are excited to share these early discoveries, which help us better understand what makes Jupiter so fascinating,” said Diane Brown, Juno program executive at NASA Headquarters in Washington. “It was a long trip to get to Jupiter, but these first results already demonstrate it was well worth the journey.”

Juno launched on Aug. 5, 2011, entering Jupiter’s orbit on July 4, 2016. The findings from the first data-collection pass, which flew within about 2,600 miles (4,200 kilometers) of Jupiter’s swirling cloud tops on Aug. 27, are being published this week in two papers in the journal Science, as well as 44 papers in Geophysical Research Letters.

“We knew, going in, that Jupiter would throw us some curves,” said Scott Bolton, Juno principal investigator from the Southwest Research Institute in San Antonio. “But now that we are here we are finding that Jupiter can throw the heat, as well as knuckleballs and sliders. There is so much going on here that we didn’t expect that we have had to take a step back and begin to rethink of this as a whole new Jupiter.”

Among the findings that challenge assumptions are those provided by Juno’s imager, JunoCam. The images show both of Jupiter’s poles are covered in Earth-sized swirling storms that are densely clustered and rubbing together.

This sequence of enhanced-color images shows how quickly the viewing geometry changes for NASA’s Juno spacecraft as it swoops by Jupiter. The images were obtained by JunoCam.

“We’re puzzled as to how they could be formed, how stable the configuration is, and why Jupiter’s north pole doesn’t look like the south pole,” said Bolton. “We’re questioning whether this is a dynamic system, and are we seeing just one stage, and over the next year, we’re going to watch it disappear, or is this a stable configuration and these storms are circulating around one another?”

Another surprise comes from Juno’s Microwave Radiometer (MWR), which samples the thermal microwave radiation from Jupiter’s atmosphere, from the top of the ammonia clouds to deep within its atmosphere. The MWR data indicates that Jupiter’s iconic belts and zones are mysterious, with the belt near the equator penetrating all the way down, while the belts and zones at other latitudes seem to evolve to other structures. The data suggest the ammonia is quite variable and continues to increase as far down as we can see with MWR, which is a few hundred miles or kilometers. 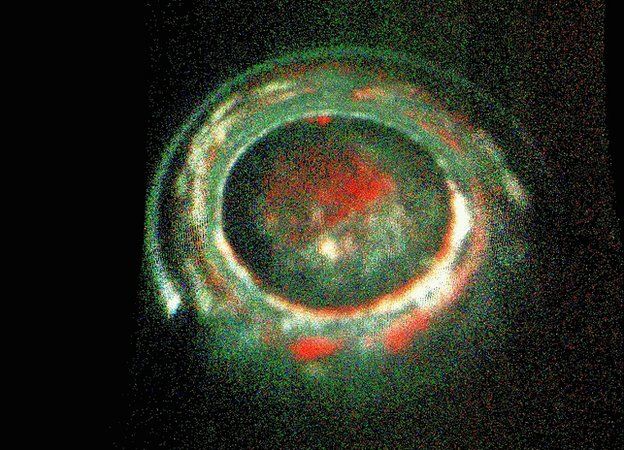 These bright lights in the ultraviolet are the auroras over Jupiter’s southern pole.

“Juno is giving us a view of the magnetic field close to Jupiter that we’ve never had before,” said Jack Connerney, Juno deputy principal investigator and the lead for the mission’s magnetic field investigation at NASA’s Goddard Space Flight Center in Greenbelt, Maryland. “Already we see that the magnetic field looks lumpy: it is stronger in some places and weaker in others. This uneven distribution suggests that the field might be generated by dynamo action closer to the surface, above the layer of metallic hydrogen. Every flyby we execute gets us closer to determining where and how Jupiter’s dynamo works.”

Juno also is designed to study the polar magnetosphere and the origin of Jupiter’s powerful auroras—its northern and southern lights. These auroral emissions are caused by particles that pick up energy, slamming into atmospheric molecules. Juno’s initial observations indicate that the process seems to work differently at Jupiter than at Earth.

Juno is in a polar orbit around Jupiter, and the majority of each orbit is spent well away from the gas giant. But, once every 53 days, its trajectory approaches Jupiter from above its north pole, where it begins a two-hour transit (from pole to pole) flying north to south with its eight science instruments collecting data and its JunoCam public outreach camera snapping pictures. The download of six megabytes of data collected during the transit can take 1.5 days.

“Every 53 days, we go screaming by Jupiter, get doused by a fire hose of Jovian science, and there is always something new,” said Bolton. “On our next flyby on July 11, we will fly directly over one of the most iconic features in the entire solar system — one that every school kid knows — Jupiter’s Great Red Spot. If anybody is going to get to the bottom of what is going on below those mammoth swirling crimson cloud tops, it’s Juno and her cloud-piercing science instruments.”

This image shows Jupiter’s south pole, as seen by NASA’s Juno spacecraft from an altitude of 32,000 miles (52,000 kilometers). The oval features are cyclones, up to 600 miles (1,000 kilometers) in diameter. Multiple images taken with the JunoCam instrument on three separate orbits were combined to show all areas in daylight, enhanced color, and stereographic projection.

Juno Peers Below Jupiter’s Clouds Reviewed by DR Ravenholm on May 29, 2017 .

Early science results from NASA’s Juno mission to Jupiter portray the largest planet in our solar system as a complex, gigantic, turbulent world, with Earth-sized polar cyclones, plunging storm systems that travel deep into the heart of the gas giant, and a mammoth, lumpy magnetic field that may indicate it was generated closer to the […]

Early science results from NASA’s Juno mission to Jupiter portray the largest planet in our solar system as a complex, gigantic, turbulent world, with Earth-sized polar cyclones, plunging storm systems that travel deep into the heart of the gas giant, and a mammoth, lumpy magnetic field that may indicate it was generated closer to the […]

Can We Do Better Than One in Apex Legends