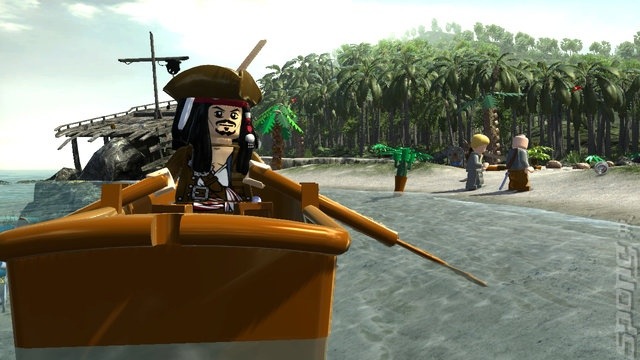 Greetings space cadets. My first real entry, I’m going to ramble about LEGO Pirates of the Caribbean, note this post is from my IGN Blog.

I enjoy the LEGO games on the XBOX, I’ve got and completed several of them: Star Wars (for the original Xbox), Star Wars 2, Star Wars 3 (that I only bought yesterday and have not played yet), Indiana Jones 1 and Batman. I got this game on preorder from Amazon as they had a bonus of 4 extra characters, I dont know why in thought this was DLC but I preorder it, had I knowen it was just the cheat codes for characters that you unlock anyway I may have waited for the game to come down in price, but I was pleased with the game anyway.

As with all the LEGO games there always good for a laught, there cinematic take on the movies are always Phun to watch and Pirates of the Caribbean is no different, and there are plenty throughout the game to see. I can only speek for the first three movies as I have yet to see On Strange Tides, but there correlation to the movies stories and finding the right places and elements from the stories for you to play in has been done very well.

The game is broken up in to the same format that all the other LEGO games, from the hub you can access the four movies and each movie in Pirates of the Caribbean is broken in to five chapters progressing through each movie. As usual you can complete each story mode level in an average of 10 minuets, and once you have worked through them you have the free play to gather up all the extras and explore all the bonus areas. One thing I noticed during play is there was none of the bonus stud multiplier area but that might just be a LEGO Star Wars thing I’ve played that a lot recently collecting the last of the precious Achivments in LEGO Star Wars II. One thing I like that was differt for me in this one was the changes to the Hub, in that you have to unlock Gold bricks to access more of the areas in the hub that where all usaly available all at one desk, it doesn’t take long for you to unlock all the main areas but getting all of them is worth it to unlock the last level, the Disney log ride that is basically a boss fight with some of the main villains (not really a spoiler as it is real easy to get all the gold bricks). Which brings me to another point, as with all the LEGO games you can get 100% completion really easy, it only took me a couple of sittings over the weekend to get 100% and collect all 1000G of the precious Achivments. It’s not all good unfortunately, there using the same engine that is glitchy as hell but the graphics did look significantly improved I installed it to the Xbox but it still crashed more times than I would like to mention. The Red bricks or hats in this case are collected around the hub, so there’s no looking for random secret areas of posting parcels back to the hub, all you have to do is some mini tasks about the hub and there unlocked for purchase. Aim for the multipliers and you can pick up the rest in no time. One other thing I discovered that was driving me crazy all afternoon was that with some characters once you have you have unlocked them and go to hub to purchase them you have to fight first I started to think you had to complete the free play levels as well to fully unlock them. In LEGO Pirates of the Caribbean there was also a new addition for the hub and free play, the ability to take all the chactors with you, just hold ‘Y’ and you can select from any one that you have unlocked and or purchased, but I warn you when selecting characters that are not in your default toggle group it did course my Xbox to freeze a couple of times.

But crashing aside this is a really Phun and very enjoyable game to play especially if your a fan of the movies, and the LEGO game series. GO BUY IT!! and maybe one day we can talk about a LOGO Lord Of The Rings, or Back Of The Furture, and on that note I will close my disjointed rambilings as this iPad spelling checker and on screen keyboard is driving me nuts. Hopefully my next entry will be more entertaining and better structures, perhaps about the new Pirates of the Caribbean movie or Brink if Royal Mail ever deliver it (over 2 weeks late now).

LOGO Pirates of the Caribbean – 8/10 on the ‘Bonniwae’ scale.

LEGO Pirates of the Caribbean Reviewed by DR Ravenholm on August 1, 2012 .

Greetings space cadets. My first real entry, I’m going to ramble about LEGO Pirates of the Caribbean, note this post is from my IGN Blog. I enjoy the LEGO games on the XBOX, I’ve got and completed several of them: Star Wars (for the original Xbox), Star Wars 2, Star Wars 3 (that I only […]

Greetings space cadets. My first real entry, I’m going to ramble about LEGO Pirates of the Caribbean, note this post is from my IGN Blog. I enjoy the LEGO games on the XBOX, I’ve got and completed several of them: Star Wars (for the original Xbox), Star Wars 2, Star Wars 3 (that I only […]