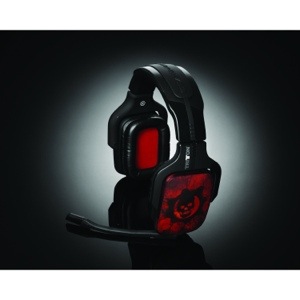 I love gears, and was looking for a headset for when I play on the Xbox at night so I don’t disturb anyone as I normally play with the surround sound on. I thought this would be ideal but it’s is very poor, I looked at a lot of videos on YouTube and people said they are good so I bought it from amazon.

So it arrived and I wired it up, and just as I’ve read on an amazon review there is a hiss from the mic because you always want to hear your own voice by default apparently, so you turn that off and then you get the buzz from the lights you can’t turn off. So you have a choice of the comedy double act Buzz and Hiss. 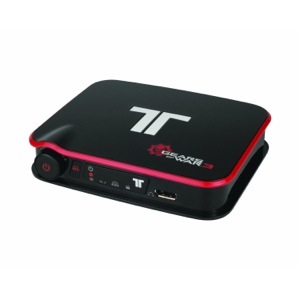 Now let’s look at the ‘decoder’ box it has a on switch with an outer track rocker for volume, and a mode switch for music, movie or what I assume is basic stereo and depending on what page you read in the manuel they have different colours. First off if you flick from music, to movie mode (because music and movie are the modes you want on a games console) there is no difference what so ever between them, none at all, other than a light changing colour. There is not even a difference defined in the manual.

Now if you want to use the on an other device lets see what trouble that will get you in to. It seem they only want you to use it on the Xbox or the PC it has a adaptor that allows you to power the headset from a USB and a normal headphone jack that is less then a foot from that. So no use if you want to say watch a movie on your iPad. Just to test the quality I had to sit a the most ridicules angle right up to my Xbox’s USB socket just to plug the jack in to the iPad. This is mad when the cable leading to the head set is over 5 meters long.

And now the quality of sound, as I said I connected it to my iPad and the sound was good considering. But when you use it on the xbox the sound is no where near as good as my real surround sound system. Using the head set sounds sound muffled like its missing elements of the sound. For example with normal surround let’s say some one is talking on the right and there voice is strong, if you where to pull the plug on that speaker you should still hear the voice but lower from the speaker on the other side, well with these that is the way it sounds all the time. The people on YouTube that said the sound quality is awesome must never have used a real surround sound system.

Overall I am very disappointed and will most like send them back if I cant sort something out this week, It might just be me with the sound issue as I hear everything with my freakishly sensitive ears (and I mean everything I can hear the neighbours 3 doors away and 2 neighbours have actually moved because I heard everything they say, moving on). I have setting up exactly the same as the manual and the videos say and set the Xbox correctly, but the sound is still not right, and the fact that it’s not a very adaptable product. If I keep them I will looking in to building my own adaptor that is only available on manufactures US store and they don’t ship to the UK. I’ve contacted there UK services and have had nothing back. Oh and what should worry you also is in the packaging there is a sheet that says ‘STOP don’t take them back contact us first if there is a problem’. So they obviously know there product is defective and they make a poor job of it.

Since I published the above on amazon, I received response to my e-mail and they said that the gears head set was not designed to function with any other devise that the Xbox 360, and they wouldn’t sell me the US adaptor. As the decoder receives it’s input by an optical cable I have since hooked it up to all my devises Xbox, PS3, TiVo, etc. and as the head set does. As need to be powered I was able to connect a small 3.5mm extension directly into the headset making listening to my iPad easy. Once the headset is unpowered and on the iPad the sound quality is amazing, with no Buzz or Hiss. I intend to modify them to stop the disco light sound hiss at a later date and will let you know.

But other then the technical issues these to look Cool…