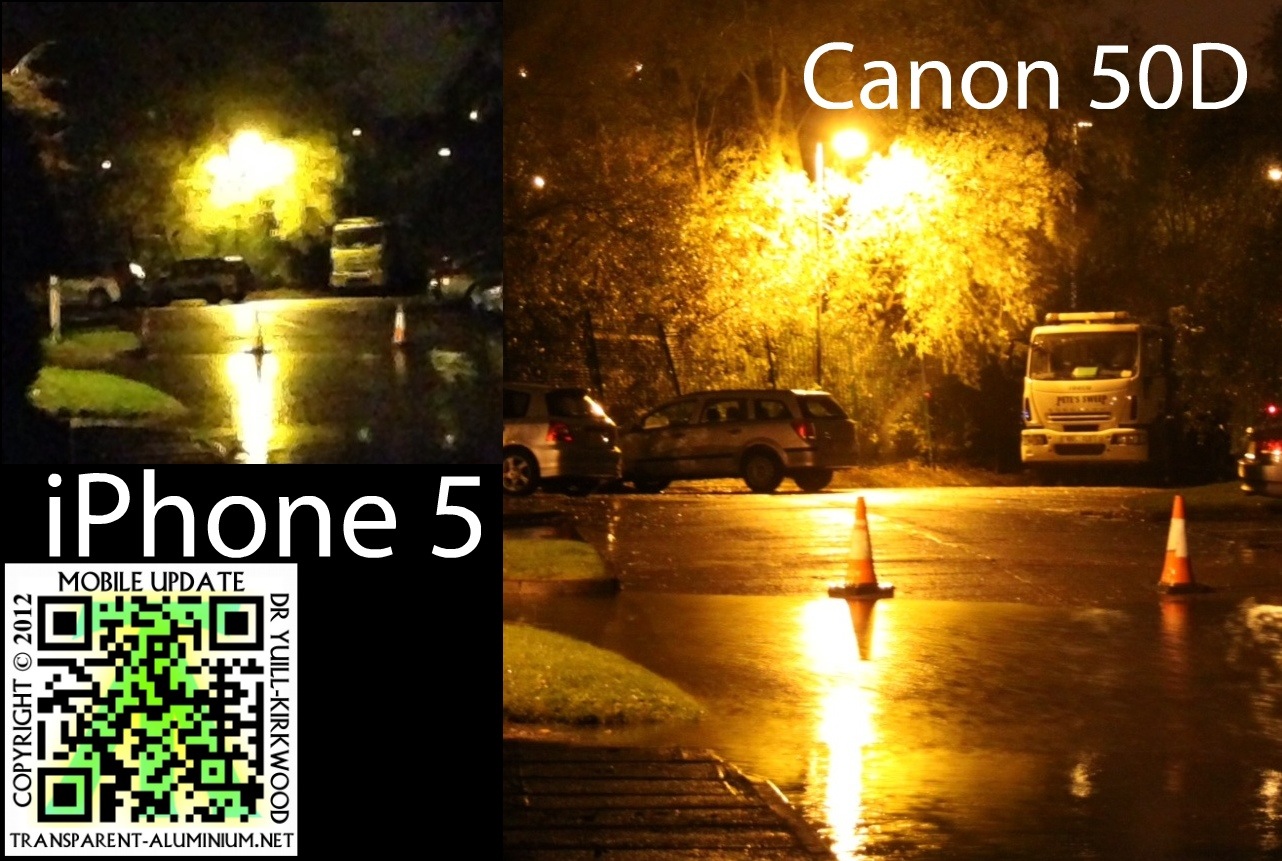 Greetings Space Cadets, and welcome back to part 2 of our iPhone adventure. Yesterday we looked at a brief first impression of the iPhone 5 and I rambled on about my previous phone the HTC TyTn. Today we are going to take a look at the iPhone 5s camera. 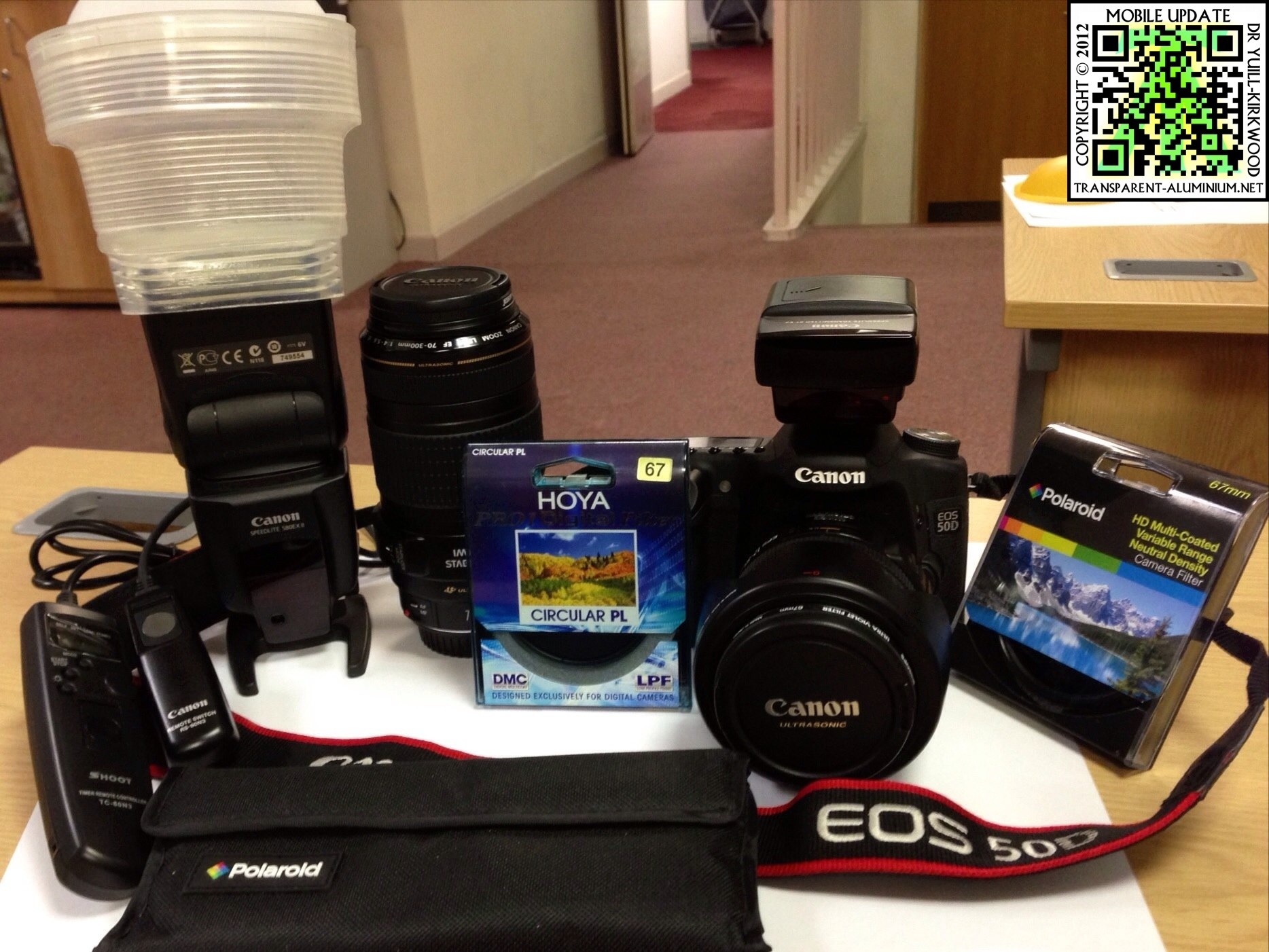 Normal pretty much everywhere I go I have my Canon EOS 50D with me, and an assortment of other kit as show in this quick snap taken with the iPhone 5 in the office. This is what on average what I carry with me I don’t brake out the macro tubes or the 1000mm unless I plan to use it. But got a quick point and shoot camera the iPhone in nice well lit environment produces some nice clean photos. The camera on the iPhone 5 has very few setting as you can see here. 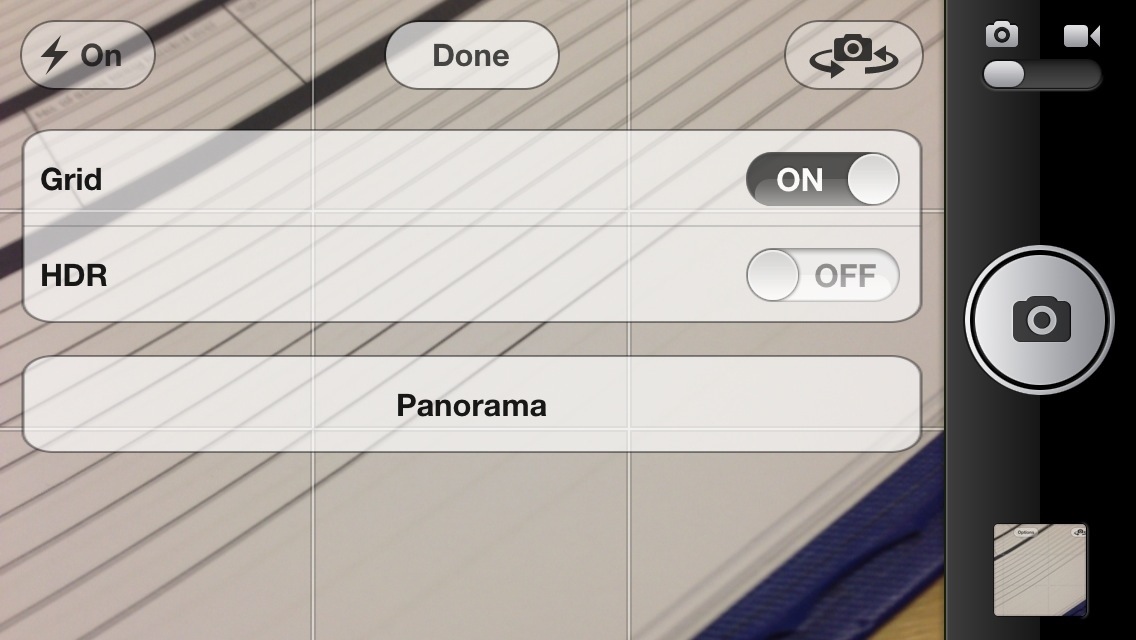 Basic flash Auto/On/Off, Grid, HDR, Panoramic, and front and back camera switch. The camera features the usual autofocus, and face detection that you would expect of want modern point and click camera.

I have only tried the HDR mode once and could see no difference to that of the original image that it saves. But I have had really bad weather every time I have tried to take photos this week, and I very much doubt that this is a true HDR photo that I would take with my 50D and process later. Although I did calculate how it could be done with a point and click camera like this one, but that essay will have to wait. 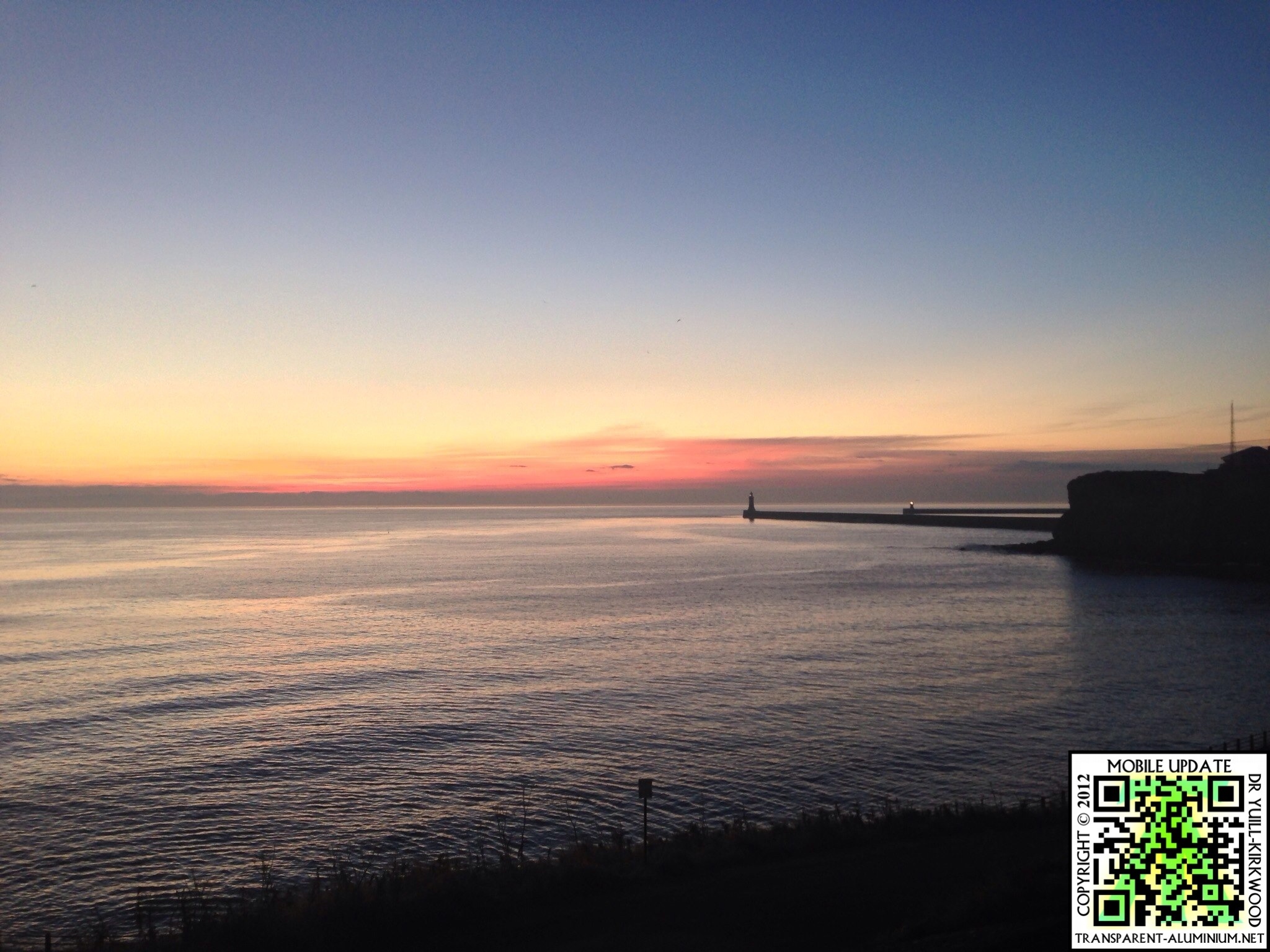 Next before we take a look at the panoramic feature lets take a quick look at the flash and low light shooting. These areas are where the iPhone 5 camera failed. When using its flash is not want I would call a real flash it’s the common LED flash that you see on many phones, it is very bright to look at, but some of my photos with it had a massive purple flare across them. Many other user are experiencing the same problem, when apple where asked about it they came up with the typical apple response. It the users fault and, that all cameras have this problem with their flash. I’ve never experiences this problem with any of my cameras SLR, DSLR, compact, or camera phone. I believe it may be due to the reflections from the case, if so then I can fix it, or if its a design flaws and light is passing under the iPhones own case, and affecting the lens. I would show you en example of this but it would mean showing you the mess on my desk… 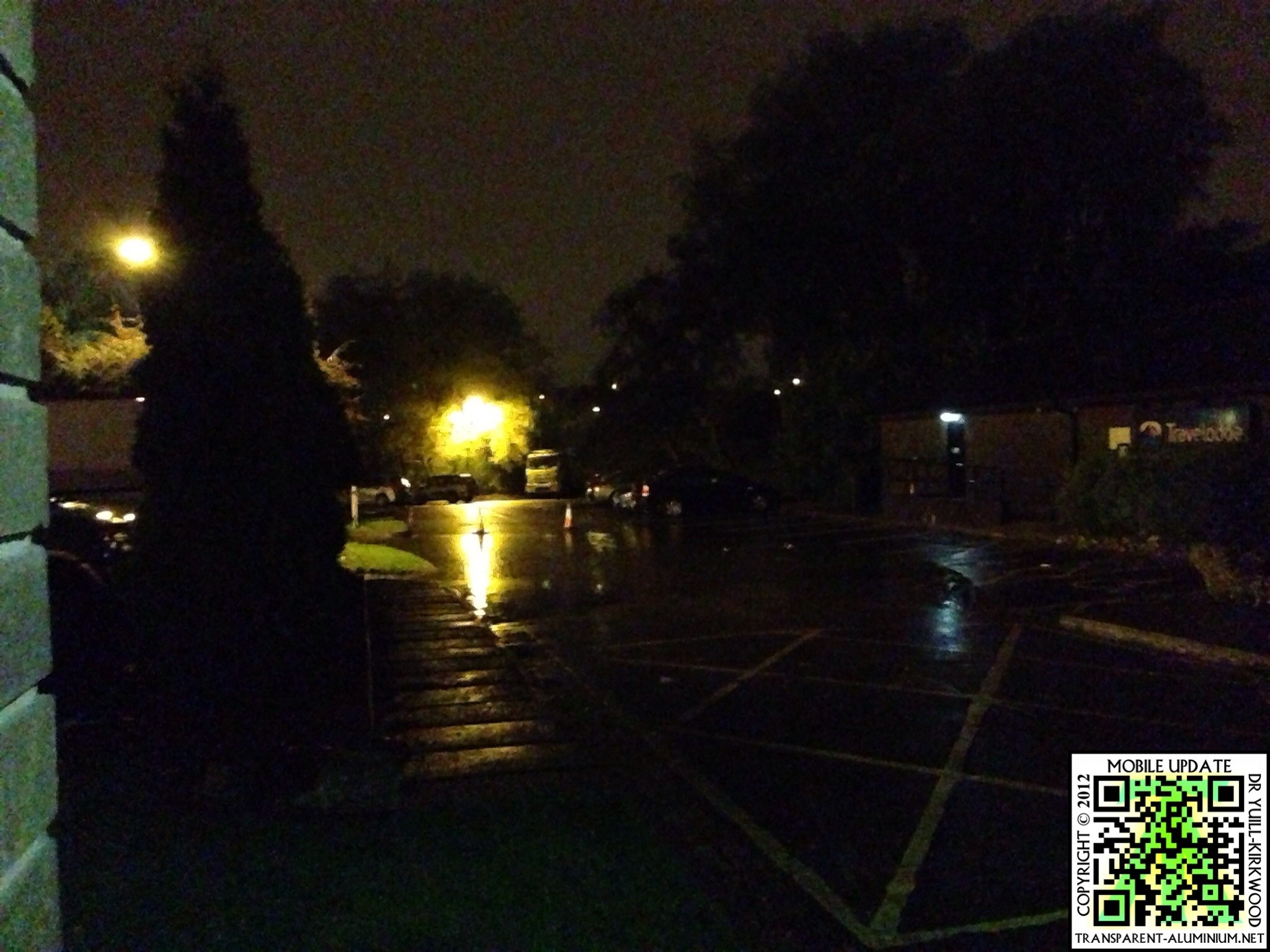 This next test is on low light is just a quick shot in our car park, as you can see we have had nothing but bad weather, and have nice little lake out here for people to park in. As you can see from the photo above from the iPhone 5 it is simply terrible, it looks almost like an oil painting. I do a lot of night and extreme lowlight photography below is the same photo taken with freehand and cropped just to show the centre with my 50D, it may have a little bit of a jiggle to it from the high winds and rain but you can clearly spot the difference, you can make out the truck in the back for a start.

The iPhone 5 also has a panoramic mode allowing you to take 28 megapixel photos by turning the camera on its site and sweeping it over the scene. 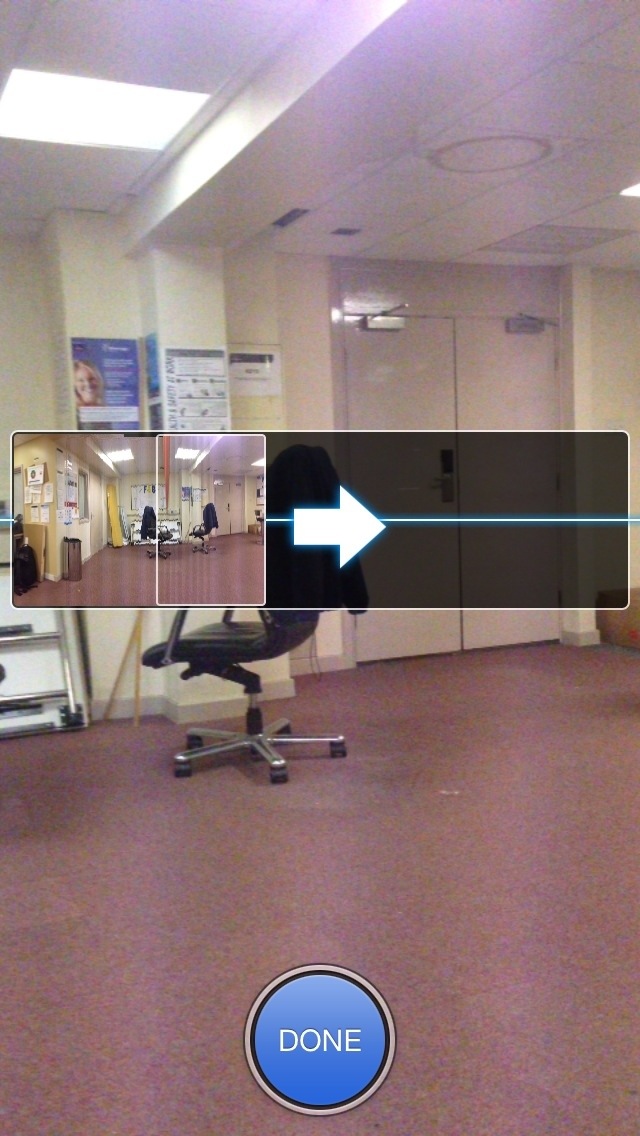 It gives you help as you try it out, the first time I tried it it kept telling me to move it slowly. It works quite ok at sticking the images as you pan across in day light as you can see below in the photo of our beautiful weather here in Tynemouth.

In this next shot below you can see the sunrise in Tynemouth, it would seem that if you don’t hold it perfectly level you get this dipping effect. I didn’t spot it as I was actually taking it. But it is an easy fix on my PC later or even with my iPads photoshop touch has to tools to fix it.

These are not complete panoramic photo to the limits of the 28 megapixel but it illustrated the capabilities nicely. In a well lit environment I think I’m going to really enjoy taking photos in this mode, maybe on my Isle of Skye I’m planning. But just like before in a low light environment, and not even that low a light, here in the office, I sat in the my swivel chair and slowly rotated round in the office.

As it was taking the photo the screen looked really cool like waves sweeping across the as it recorded the photo, but even in what I would call a well lit room here it could not cope and produced an image with terrible lines from where it has trying to put the image together, but one think I did like in this image is look at the computer screen in the right as I ran the iPhone past it half way the screen saver started up making a cool looking split down the screen.

Now on to the video recording, and I have to say for a little camera I am very impressed with its performance. To test it the quickest way was to simply mount the iPhone in one of my camera rigs in my car and go for a little drive, to show off out beautiful weather here in Tynemouth. I would recommend if you can to crank the image quality to 1080p, this I what I uploaded it to YouTube as and you can really see the detail. If the video does not appear click here.

I of course edited all this on my iPad, but the quality of the images speak for them selfs, sighs, and car registrations clear. It does take a massive amount of memory so if you what to shot for a long time you need to get the footage off quickly, assuming the battery did not run out first. A 5 minuet clip I shot was over 700Mb. In day light it’s perfect, in darkness it also works well, and I hope from this I can muster some volunteers to clean my car, or at least my windscreen, preferably some girls like this… 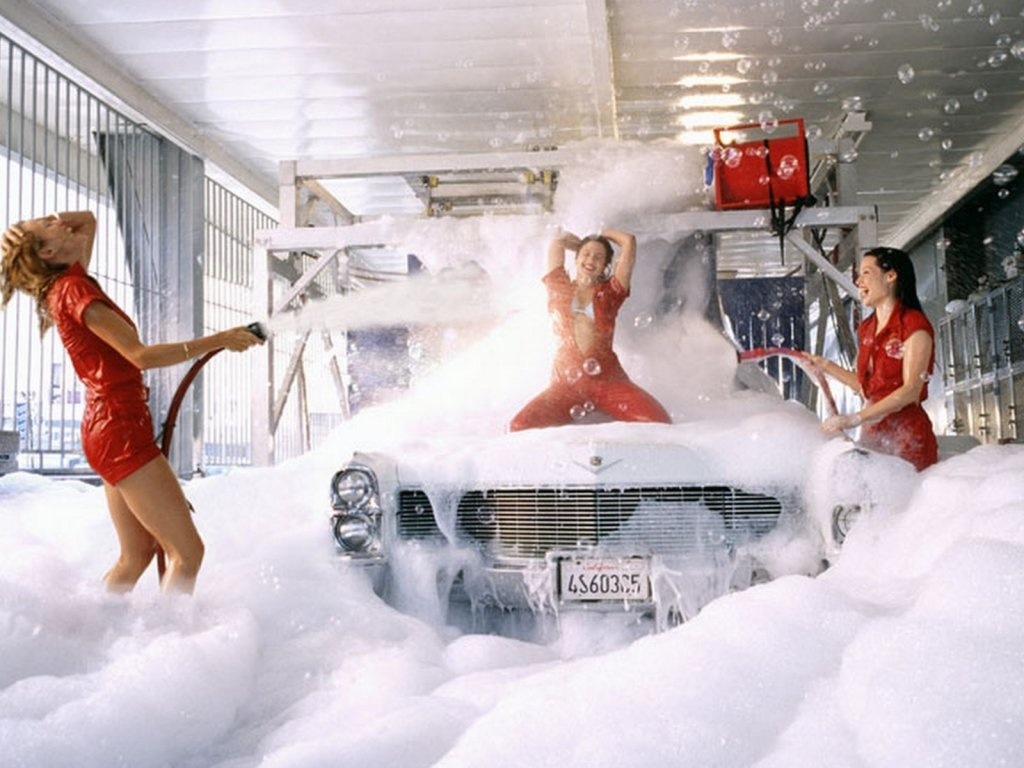 … My address to sent the girls is…
I home you have enjoyed this little look at the iPhone 5 camera I will be posting lots more photos using this camera and as many of these images as I could for this review have been taken with the iPhone. It is quite an impressive little point and click camera, with a good range from some close up shots you will see tomorrow in the look ant the hardware and accessory, too impressive vistas. So we will see you tomorrow same Bat-time, same Bat-channel! (I watch way to much Adam West).

Greetings Space Cadets, and welcome back to part 2 of our iPhone adventure. Yesterday we looked at a brief first impression of the iPhone 5 and I rambled on about my previous phone the HTC TyTn. Today we are going to take a look at the iPhone 5s camera. Normal pretty much everywhere I go […]

Greetings Space Cadets, and welcome back to part 2 of our iPhone adventure. Yesterday we looked at a brief first impression of the iPhone 5 and I rambled on about my previous phone the HTC TyTn. Today we are going to take a look at the iPhone 5s camera. Normal pretty much everywhere I go […]