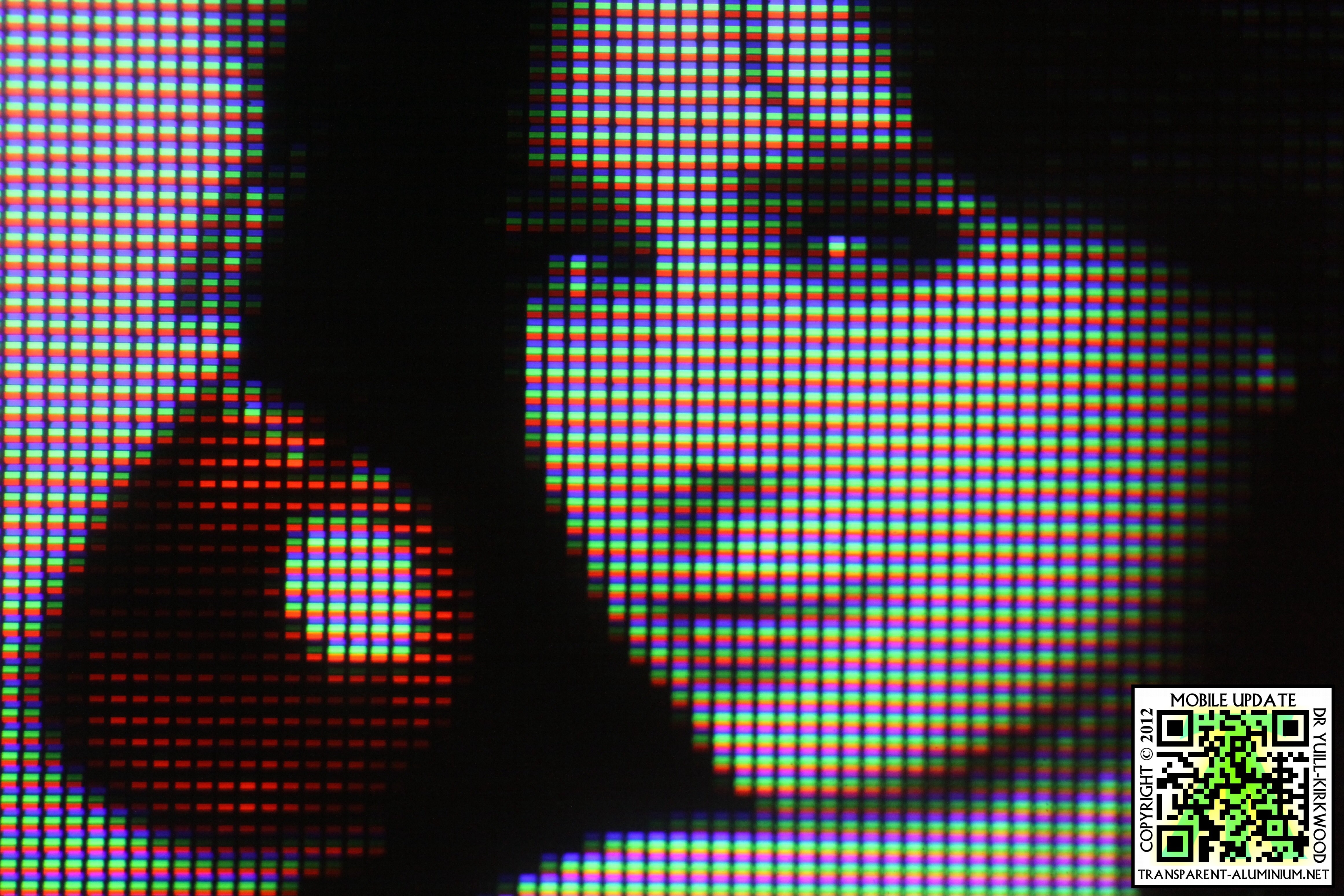 Greetings Space Cadets, and welcome back for part 3 of our iPhone adventure. Yesterday we look at the camera and today we are going to take a general look at the hardware of the iPhone 5 and before we start I still don’t know what “Hudactia” means and if it was something important I was going to talk about then sorry we’ve lost it.

Let’s take a look at the display first, as every one knows the iPhone 5 has a 4″ retina display with a resolution of 1136×640-pixel resolution at 326 ppi, and produces very clear and bright images. If you have not looked at this type of screen before you really notice the difference strait away, and I’m going to give a little comparison with a previous generation screen using my iPad2 and to help us I’ve called on a glamorous assistance, Alessandra Torresani from Caprica. 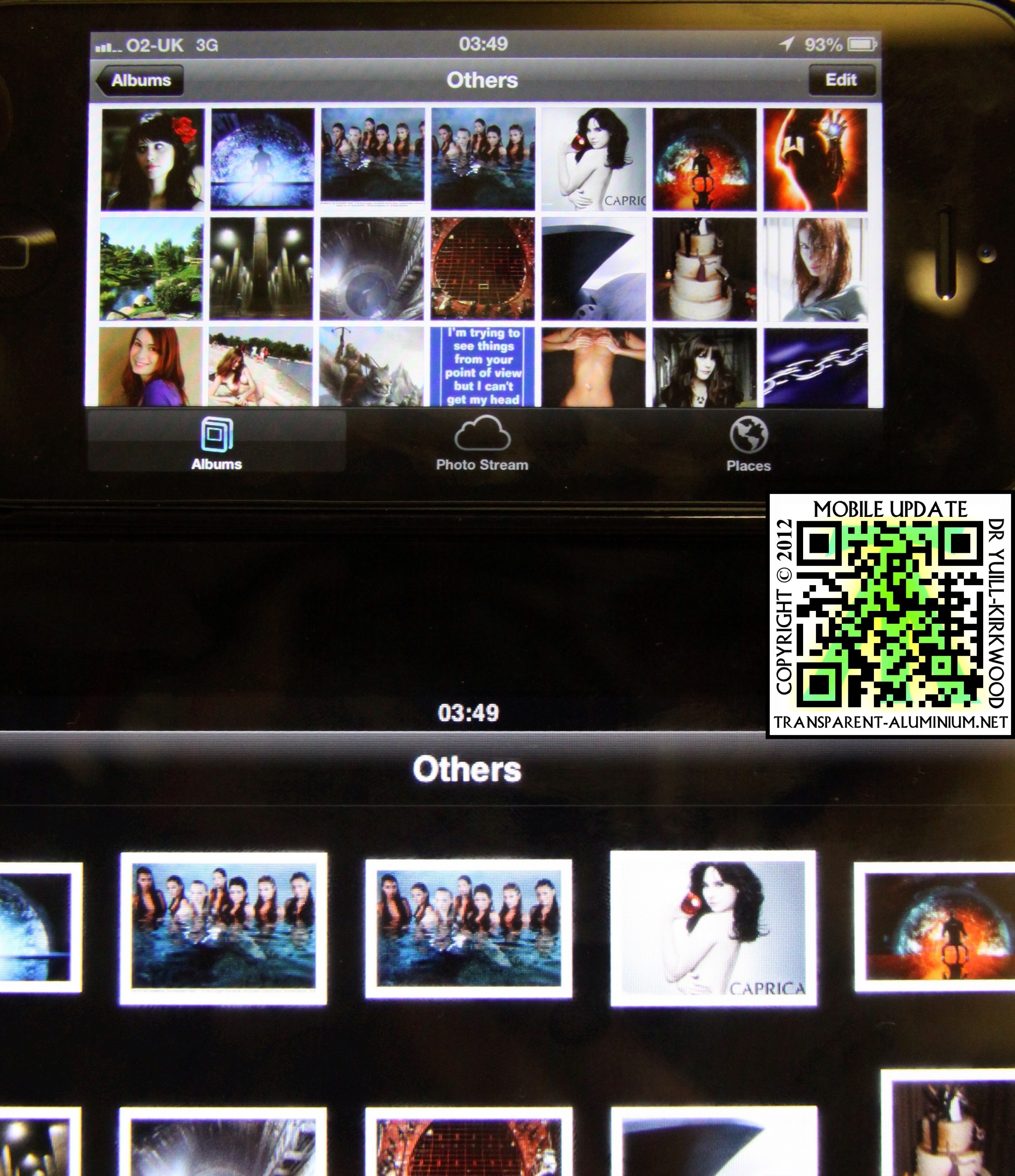 Here you can see the devices side by side and just looking at the thumbs there is a clear difference. Even as the iPhone thumb is smaller the image is massively clearer then that of the iPad screen. The iPhones retina screen makes the individual pixels indistinguishable while over on the iPad representing a normal screen you can clearly see the lines of resolution. Next up lets take an even closer look at the displays, using my own crazy macro rig. 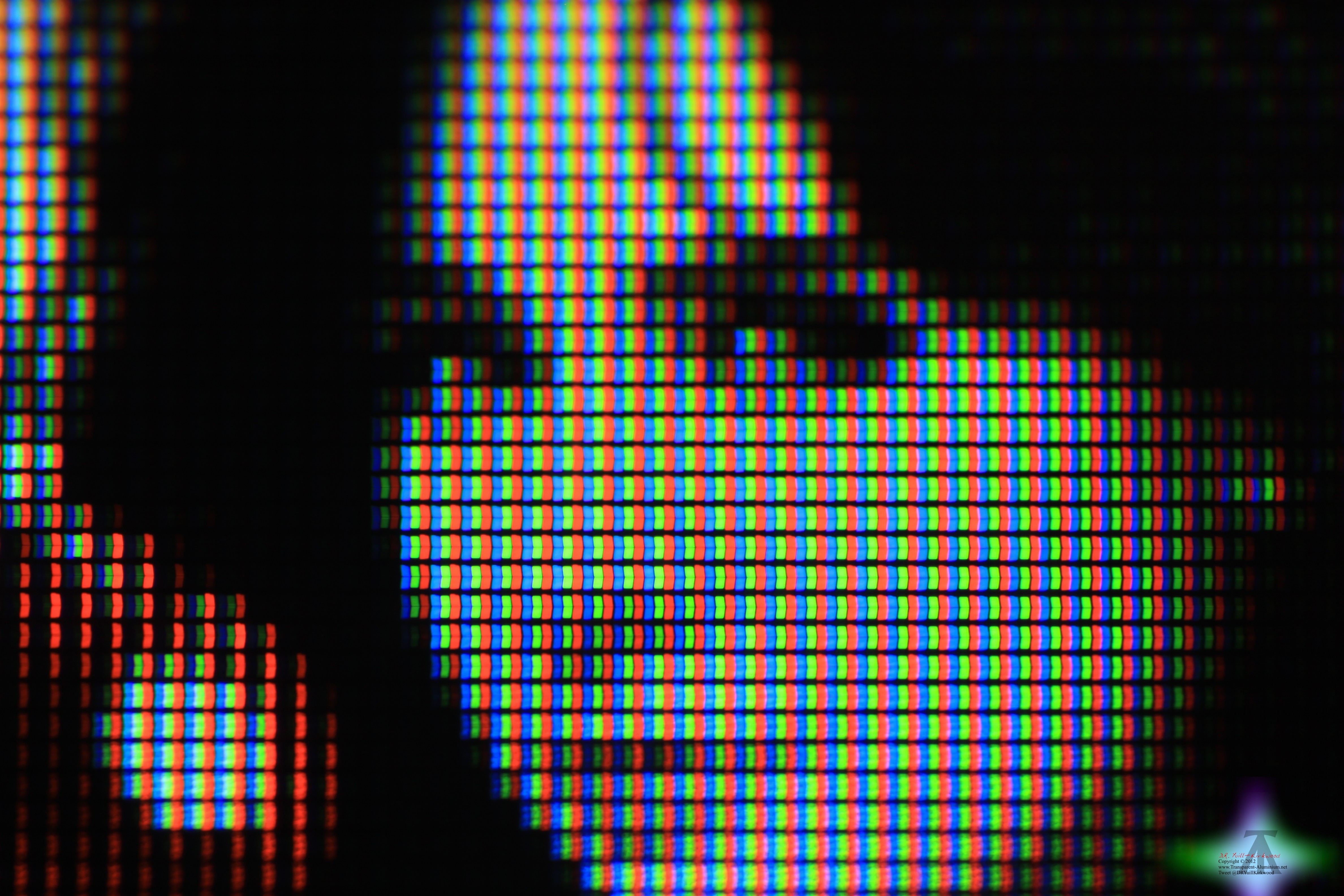 This is a magnification of the thumb images as illustrated in the first image. The iPhones thumb was about a third of the size of that which is displayed on the iPad screen and here even at the smaller scale it has more detail than that of an older display, showing a larger image. 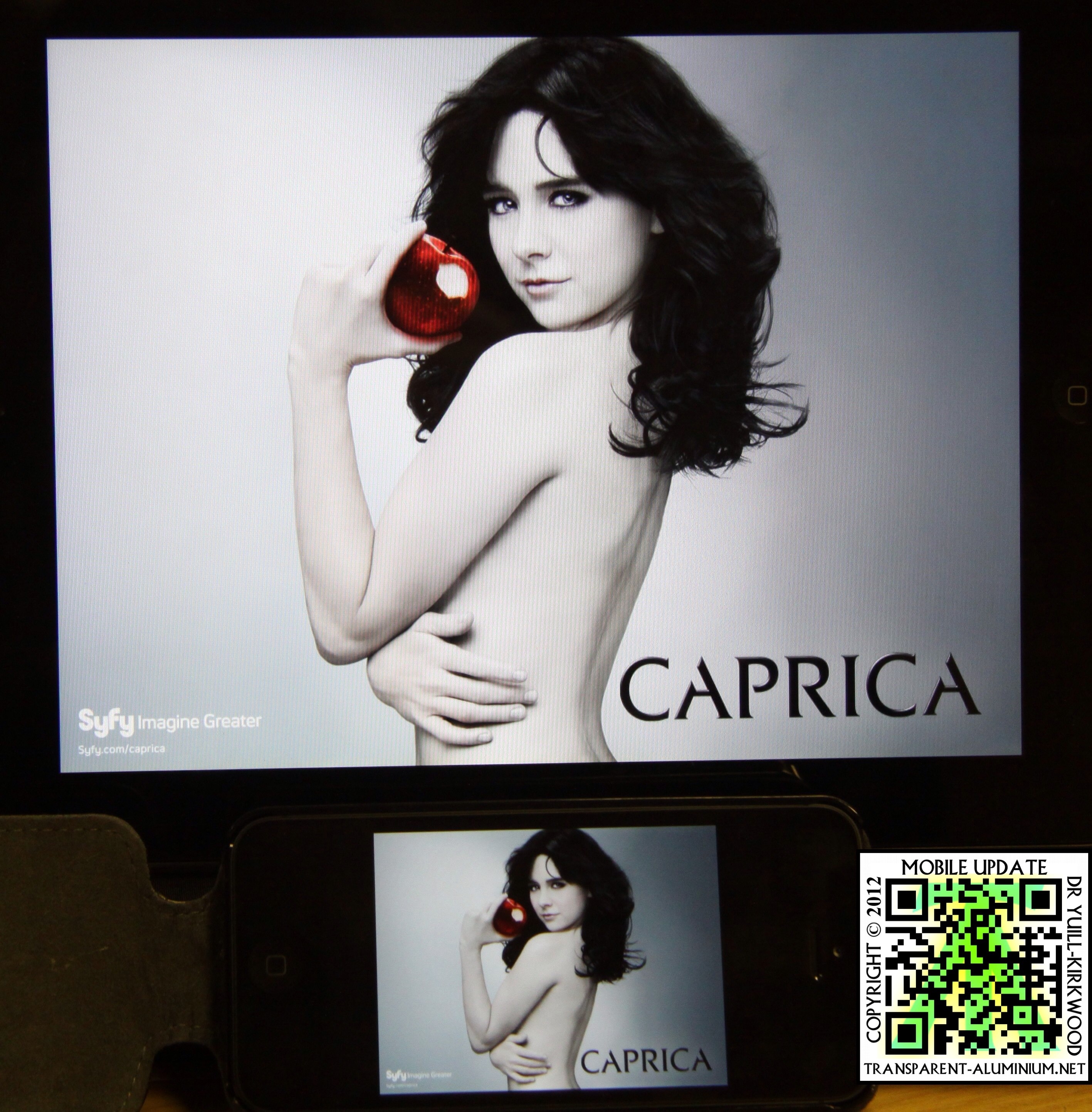 Looking at the images side by side in full you can really see the difference a retina display makes. 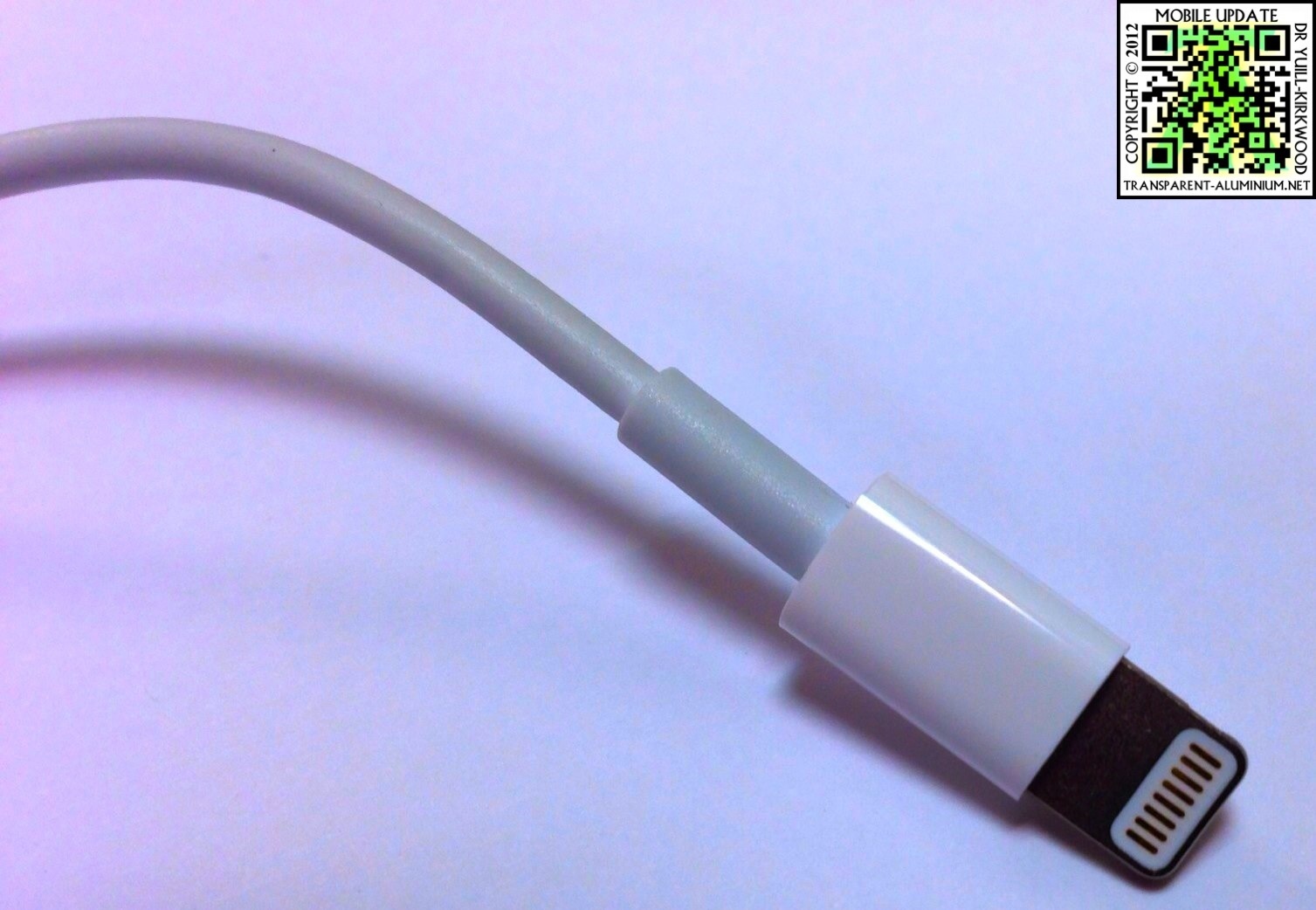 Lets take a look at the new lightning connection now. This is the third iteration of apples proprietary connection for there produces. Some people had thought apple would go down the line of micro USB, but where would the profit be for them with that when we can all shell out for adapters or new accessors. That said I do like the idea that it makes not difference what way you put it in, and another thing I spotted was if you put it in with nothing on the USB end the screen lights up in anticipation. There is not much more to really say on this note, other this it slides in and slides out as you would expect :p but there is a floor, the overall feel of the cable is just as weak and flimsy as the old ones so if you’re not as careful as I am you are going to be replacing this cable all the time. Some people have also reported an issue with not being able to get there USB end out of their computers, I did have is problem the first time I connected it to my PC but after that first time the issue has not occurred again. 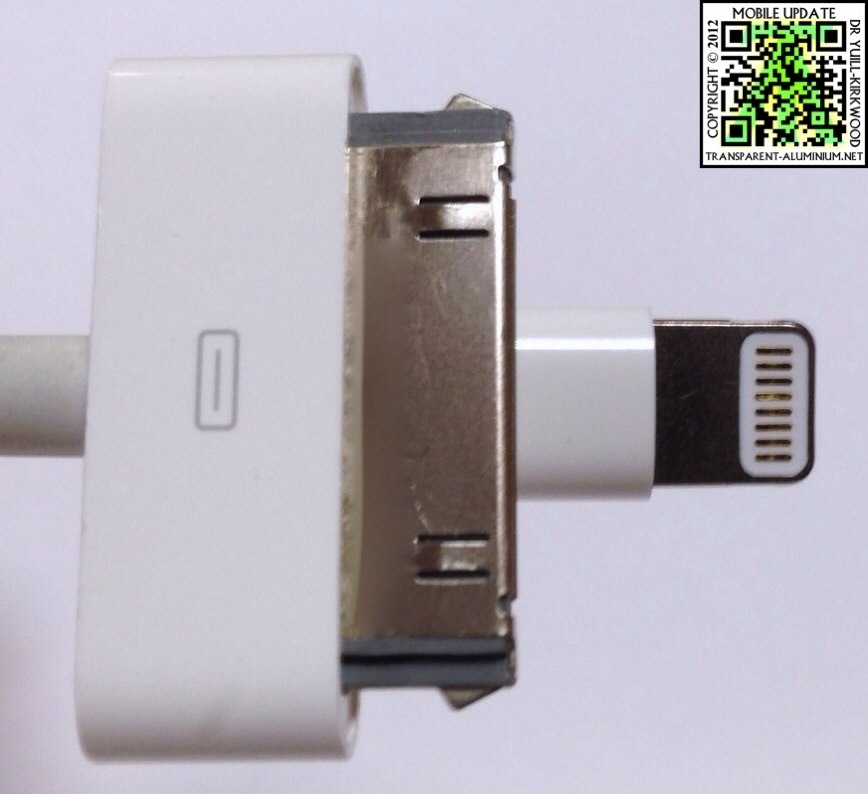 With regards to accessories you can spend £35 on an adaptor, but I don’t know how versatile these are, my Mazda 6 TS2 Auto iPod dock has a first iteration apple 30 pin connection (before they swopped the FireWire pins) this was fine for my first generation iPod Nano until the mechanics at the Wallsend Hodgson Mazda dealership broke my iPod while it was in for its service and MOT and would not replace it, (2 years not and stuck with the same 6 CDs). But my question is is the lightning to 30 pin smart enough to work or will I have to use 2 adapters. I wonder if the apple store would let me borrow a display adaptor for half an hour to try before I buy?

And thinking of playback the speaker on the iPhone produces a really rich clear sound. Even my mother who I am convinced is tone deaf commented on its clarity from across the room when she heard it ring. 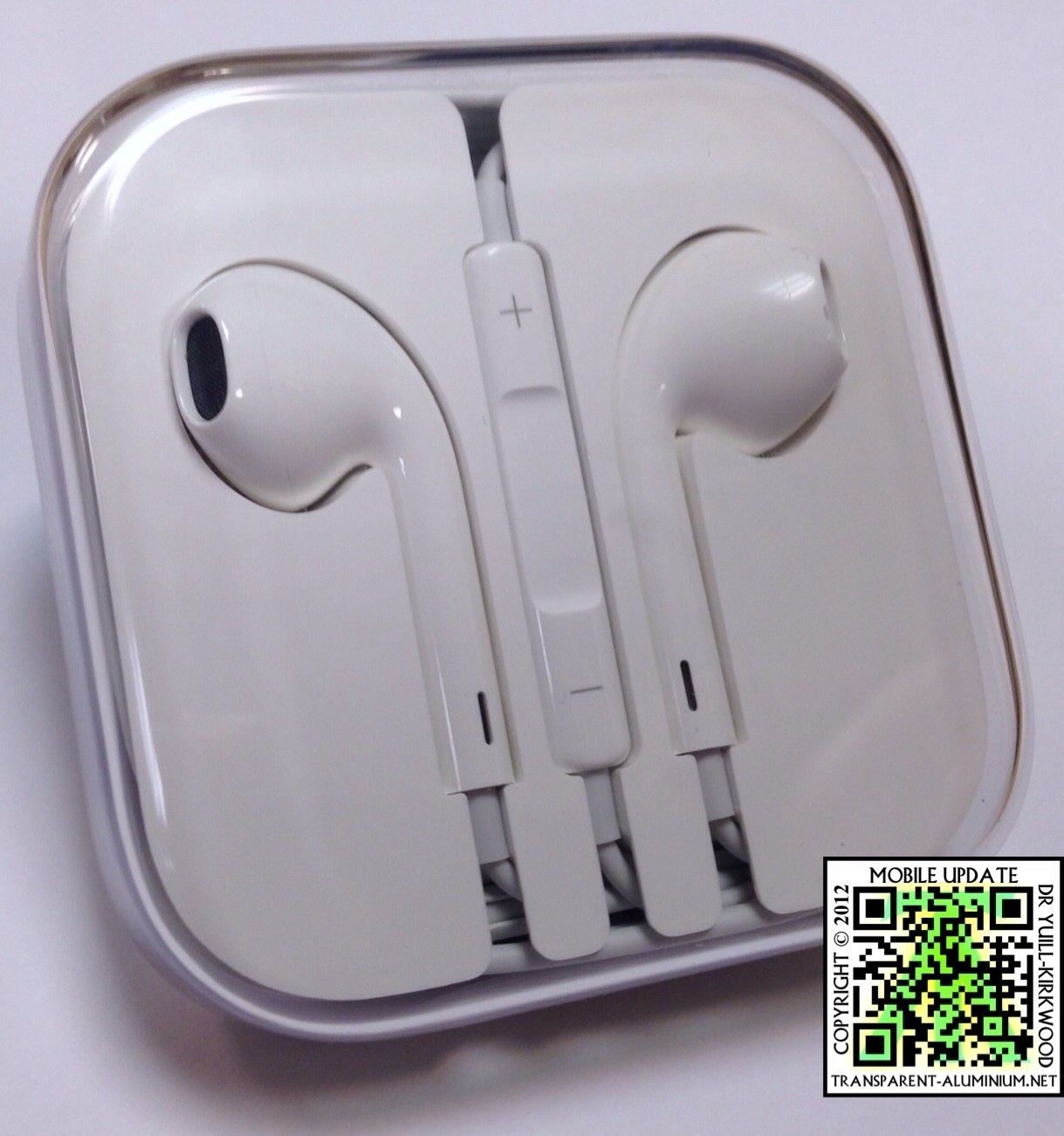 The new design of headphones is equally as awesome. I don’t usually like this type of headphones the inner ear types as they start to hurt badly for me after a 10 minuets or so and my right ear simply rejects them and pops them out of my ear fording me to angle my head or keep my finger in to hold them, I normally go for full headsets or I have a small set that wrap around the back of your head. But these are really good I’m sitting here typing this listening to a mixture of Evanescence, and Howard Shore, and no pain there still in and the sound quality is simply outstanding. There are still constructed of the same flimsy material apple are so fond of and unless you take good care of them they will brake, so I intend to keep the in this little case they came in when I’m not using them.

The iPhone itself is very light and slim I’ve added a case to keep it safe in my pockets, this has made the volume controls a little difficult to use. The home button feels a and sound better on the iPhone 5 when compared to the iPad2, I know it only moves in a tiny way but it feels like it goes deeper (that’s what she said…).

And now on to the final part of this section, the battery. It’s like a car with a big engine one one gulp and the tanks empty (that’s what she said, also…). You can actual watch the battery going down its that fast. Apple as usual say its a user problem, telling us to stop using 3G and LTE, stop using location services, stop using WiFi, don’t listen to music, turn off email and notifications, turn the screen down so you can only just see it. Apple must not have realised we would want to use the iPhone and not just give them money, so we could have bragging rights.

Saying that I have managed to squeeze more time out of my limiting my use. I have my email the same as my iPad on an hourly fetch, I only have notifications for want I really want, I have location services on full, and what is most likely saving me the most is I choose which antenna or radios I want. For example I don’t use Bluetooth much at all so that’s off and when I am at home it switch WiFi on and mobile date off and vice verser when I go out. With this I managed to get from 100% at 2200 on Sunday night to 31% on Wednesday morning at 0300 with 3 hours of actual usage. I sit and work on my IPad2 for house and have no battery issues, I would have thought the bigger screen would drain it faster.

Well lets leave it there with a look at the general hardware of the iPhone 5, but until then let’s thank our assistant today Alessandra Torresani and since I promise B(.)(.)Bs here you go. 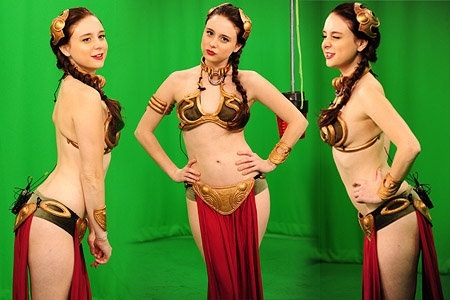 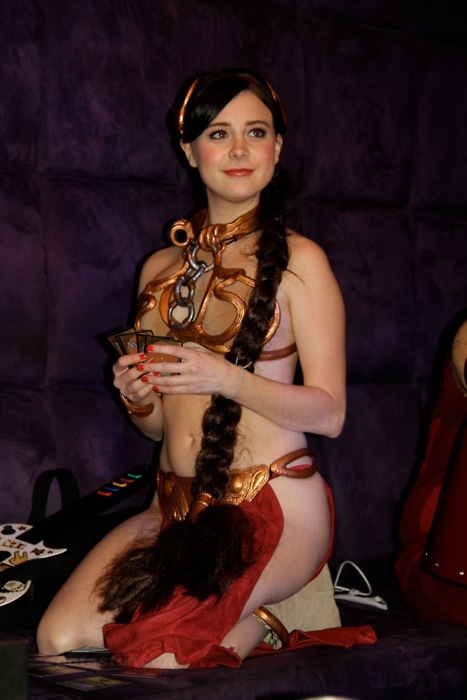 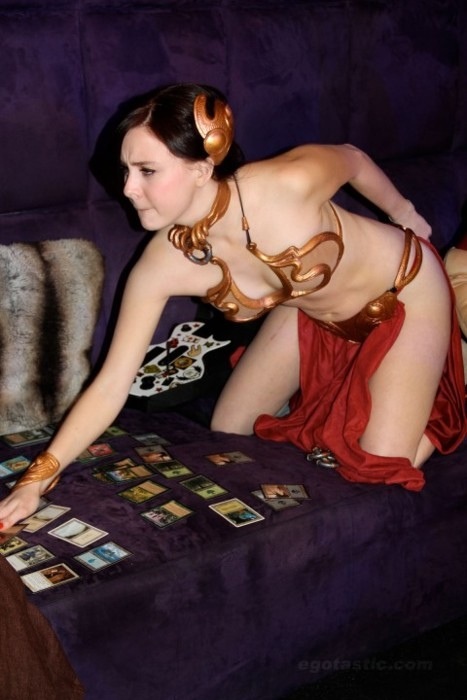