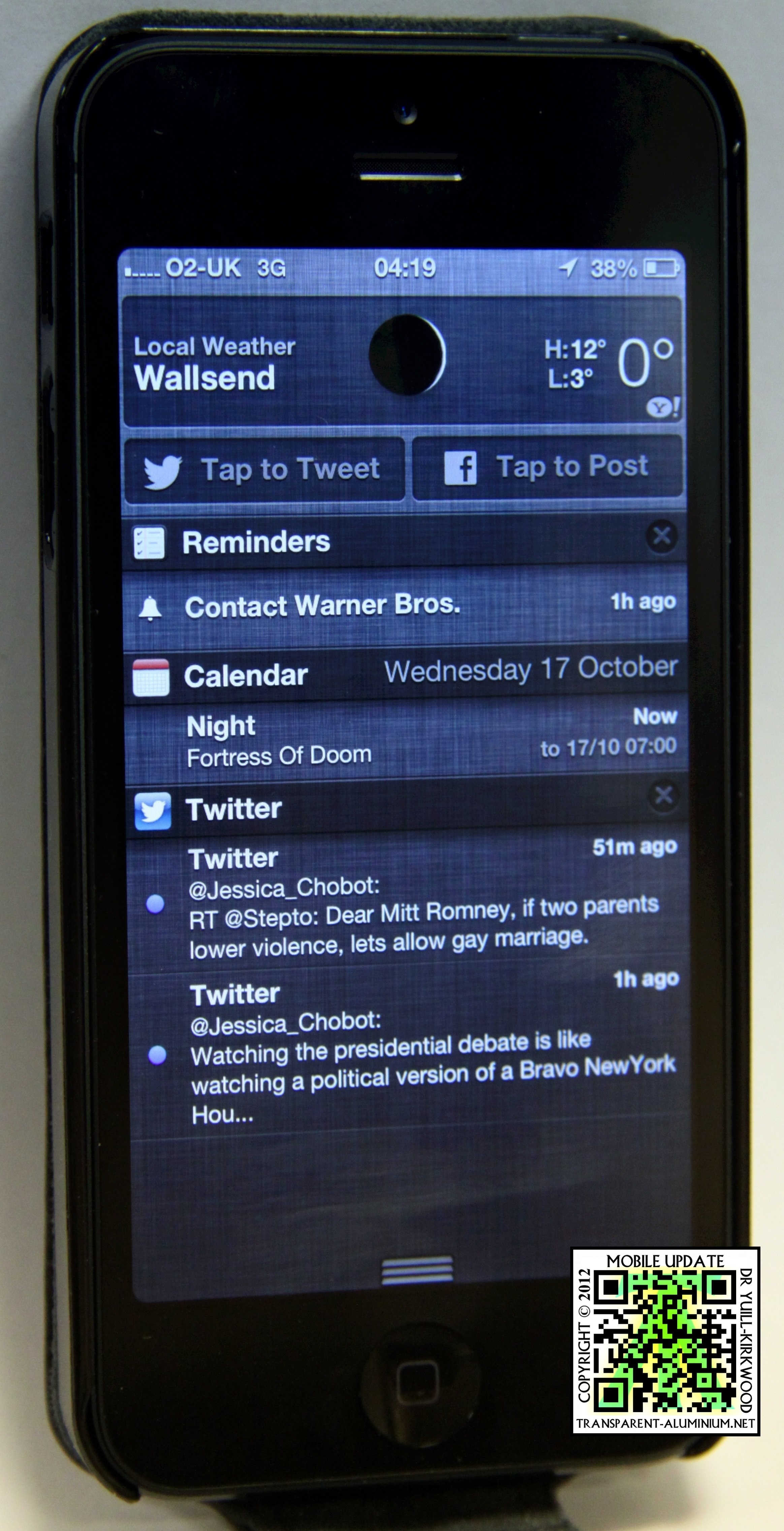 Greetings Space Cadets, and welcome back for part 4 of our iPhone adventure. Yesterday we looked at the some of the hardware aspects of the iPhone 5, and today we are going to look at iOS 6.

Lets start with a look at the iOS 6 on the iPad2 and move on to the iPhone 5 as we go. Updating the iPad was not with out problems. Understandably it was a slow download as I tried to download it on release day but once I finally installed it taking a quick look there was not really any difference from the iPad2’s perspective. The update did take the privilege of corrupting all the album artwork on my iPad forcing me to spend 7 hours, syncing it all from scratch, and for some reason I am now experiencing an issue with the other storage on my iPad being over what it should be by a massive levels. Apple as usual blame user but there are too many people experiencing this issue, and since apple make all their devices closed platforms now so you can’t really access the root to repair it your self. I have tried some third party software to access the iPad but even that did not grant full access to what I would need to examine. Given Apples support history and there need to make us buy there new products we can say with some assurance that this will be the last update for the iPad2 as they generally discontinue support after 2 years. As usual apple has restricted what specific divides can get form the update. So there is no voice dictation, no Siri, and as an added bonus as apple have had a falling out with google, there is no google maps and no YouTube, the only new elements of note are Facebook integration in the same style as that of the twitter integration that we are already used to. Tweets and Facebook posts can also be accessed form the notification area. You do get a new map app from apple but it is simple terrible, and a clock app that can be simply described but this picture. 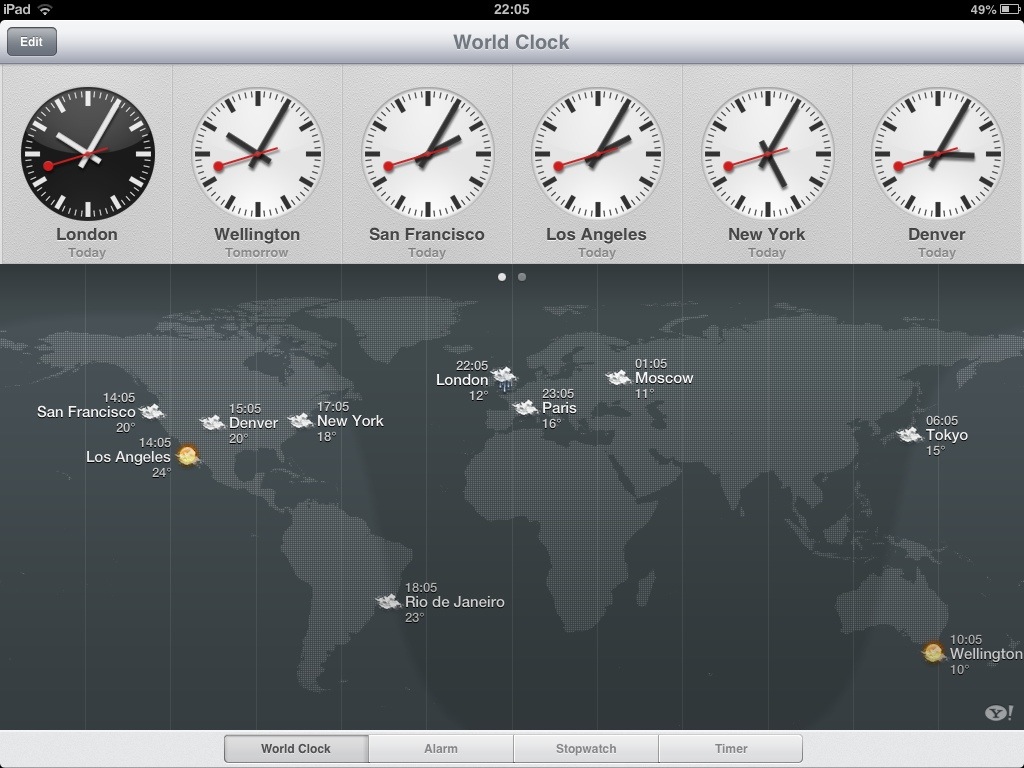 My clock is better…

Moving on to the iPhone 5 Setup was more than a breeze. I thought I would be spending all day matching my preference from my iPad2 but all my email accounts, quick text shortcuts all synced, all with the exception of my email signature. But with iCloud, a quick copy and paste in notes on my iPad and then again on the iPhone and I was done. If you have multiple apple devices your general setup will be quick and simple. Things like save data dorm games did not sync, I was hoping they would come from the iCloud back ups to from iTunes on my laptop but unfortunately not.

In iOS 6 you loose some apps like YouTube, you can download googles own app but its iPhone scale only and simple horrible to use. Not all videos play, you can only view on low quality. Trying to access YouTube videos from safari is equally a nightmare, embedded videos play in low quality, but from the YouTube site it’s self you can’t see a thing. Come on Apple kiss and make up with google. You have made it very difficult to use your devises to there full potential.

Lets take a look at the new apps there are a couple of new ones. Easy one first Passbook, this one I am sure is useful, probably more useful in the colonies, but for me it has no use. Another one that is no use to me is the stocks, you can also get this in the notification canter along with the weather. As seen here.

The weather an also be expanded but know sound effects or fun graphics like on my girlfriends android phone. 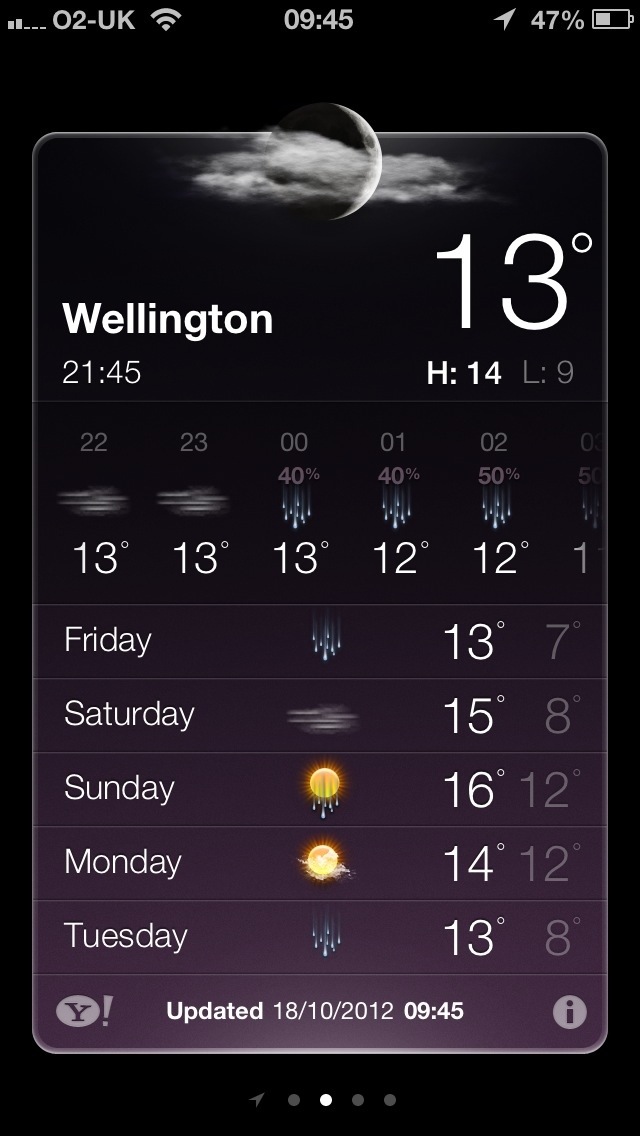 This graph from the stocks app means nothing to me. 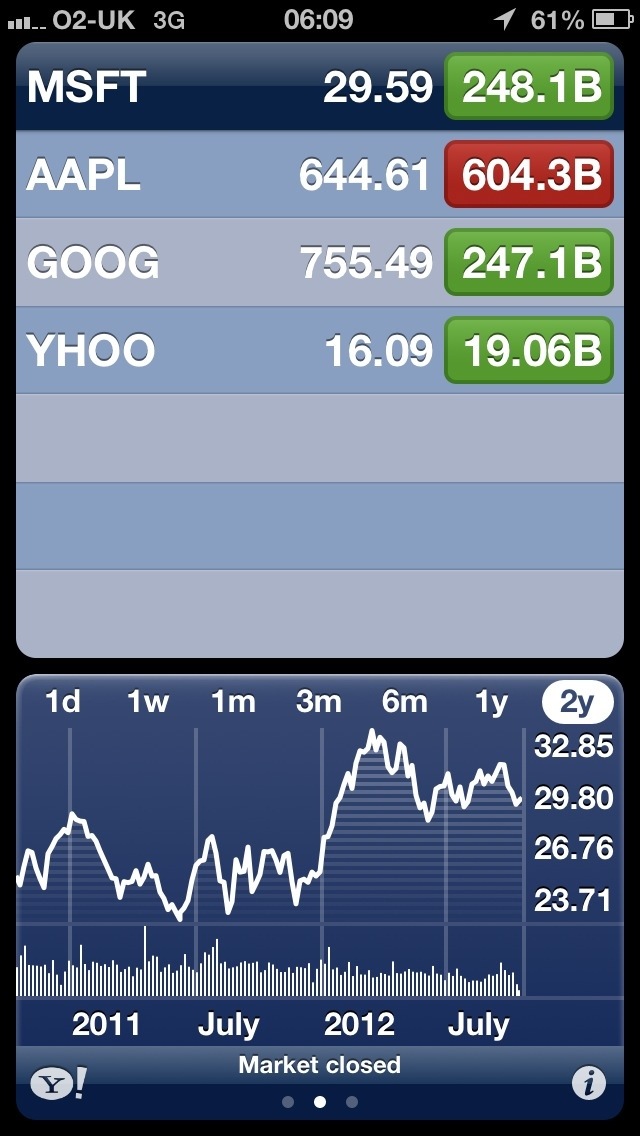 Next up as you all know you we have lost the google maps app, but apple have made there ‘own’ app. There own app that is simple terrible, so terrible that apple instead of blaming the users actually issued an apology. But they where not so sorry that they gave us google back. Apple also had the nerve to say that loads of people are using it, what they don’t seem to realise is that as they have not given users a choice so they have to use its inaccurate and incomplete maps. I seem to recall an court case a little while ago against Microsoft allegedly forcing users to use there Internet explore, and resulted in Microsoft having to offer all the leading brands to all windows customers (I stuck with Microsoft). So when the world realises this hopefully we will get the google map app back. You can download google earth and still see the maps from there website, but its not as good an interactive experience and there is not street view. So lets take a little look at what apple have dumped us with. Now if your remember the key notes from summer they wowed us with the pretty colours of there 3D maps and said that they where out making there own maps but this is not quite true, they have simple bought maps from TomTom, so we have there maps till apple fall out with them. This app dose give you spoken directions as you travel, just like your TomTom, but it would be best to view the maps in maps only style not with the satellite. As you can see here you won’t see much as we a obscured by clouds. 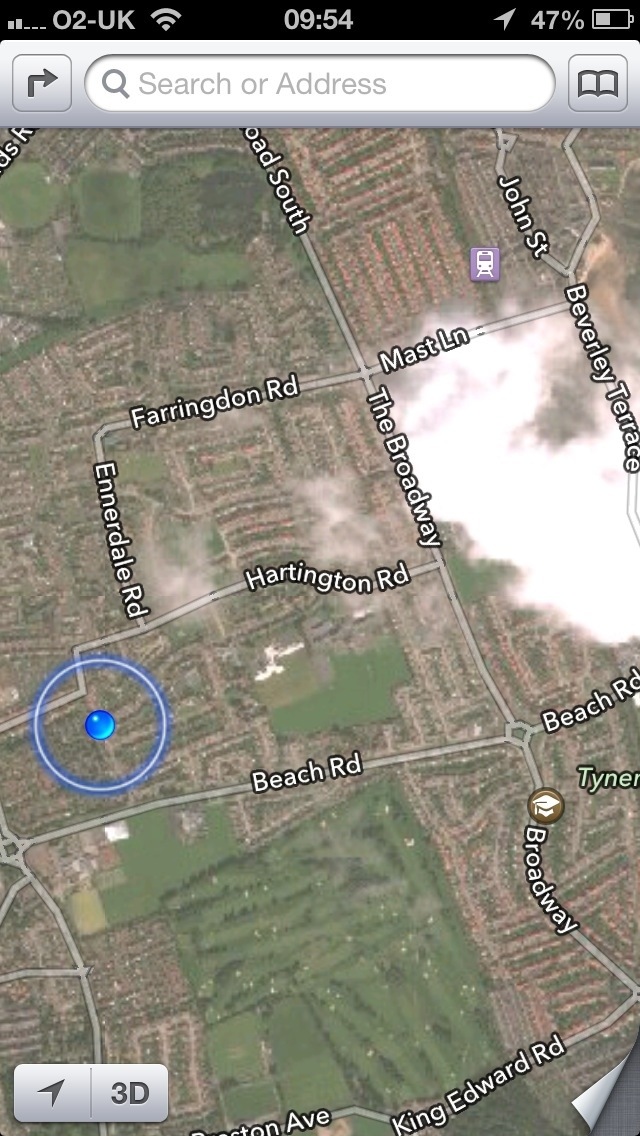 Looking for an address will also course some headaches if you want anything accurate, for example of you take my street, every house on it is number 1. 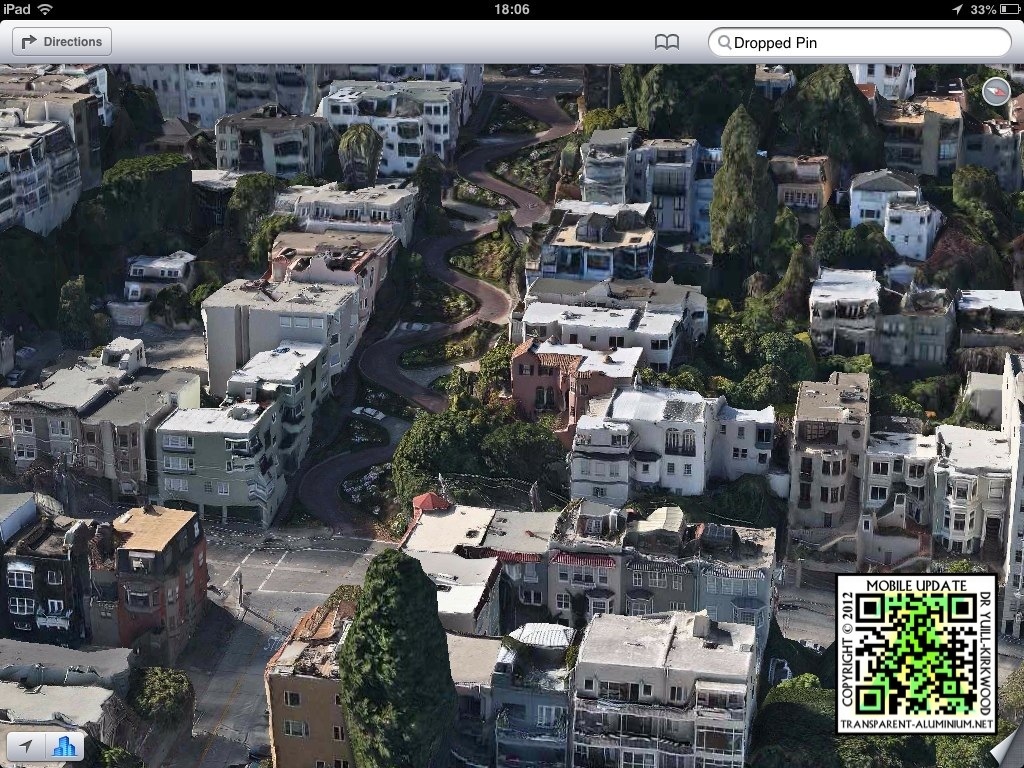 For us in the UK the 3D mode is not much use as it only covers certain areas. They are not the first to offer 3D in there maps Google has had this for years. But looking at it it looks to me like an odd painting, some sort of abstract art, if you could get a slightly lower angel I could have some fun making these pictures. This feature again is more for those in the colonies. 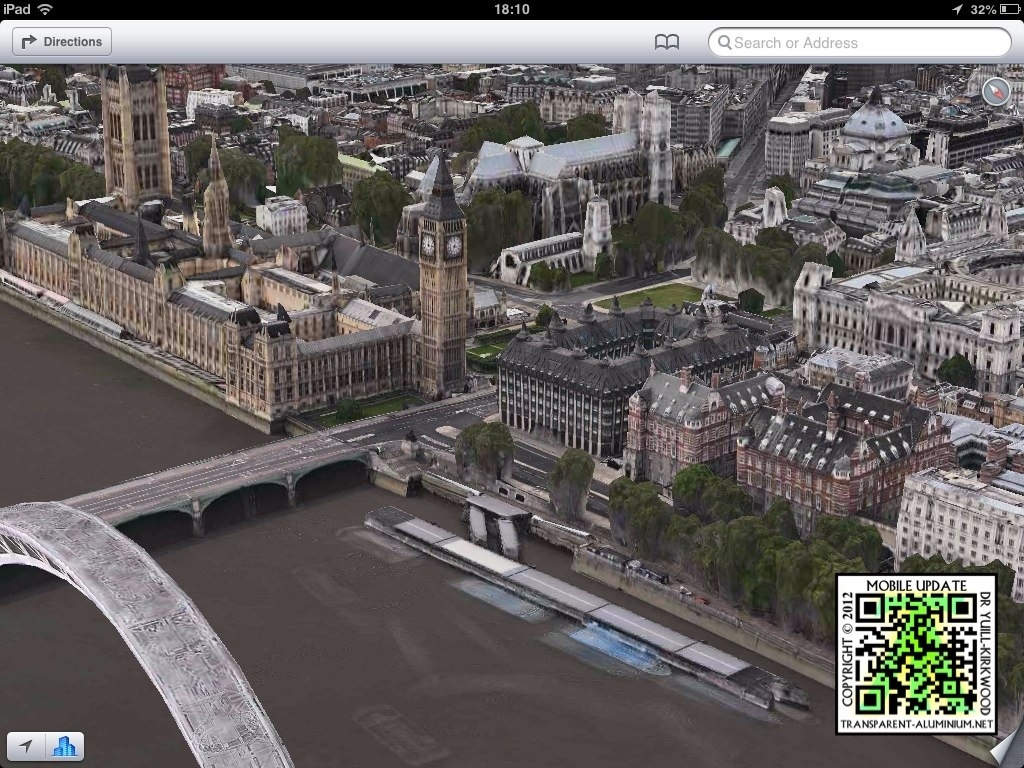 They have also remade the App Store. Unfortunately the it’s still as poor as the last one. Navigation is still rubbish and now there is less on the screen but what you can see is crammed into a tiny area for you to scroll. They need to bet the Amazon people to make the App Store, they have really good navigation system with everything broken down into multiple subcategories. Unless you know what app you want there is simply no browsing with Apples App Store. 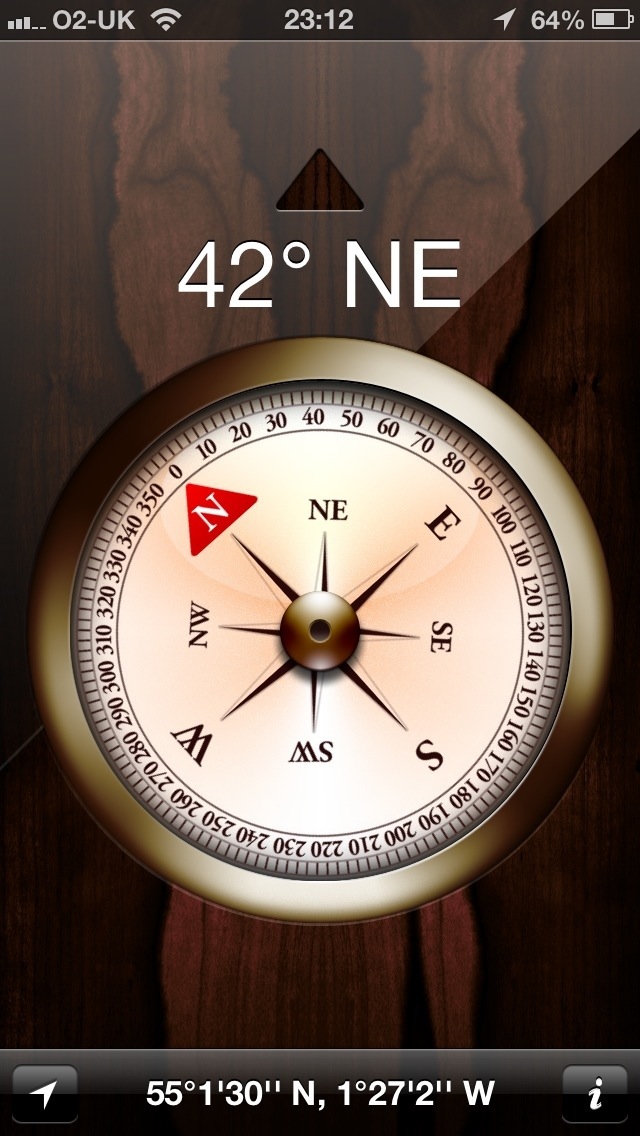 As this is my first iPhone I’m not sure about the other inbuilt apps, you get a compass that looks cools, and a calculator. I know you can get free ones from the App Store but why do they not include a calculator on the iPad. The video app is a little better organised than the iPad I like that it groups the artist together unlike on the iPad where you it’s every video for its self. This may have been true of the iPhones, and iPods but since this is my first one. 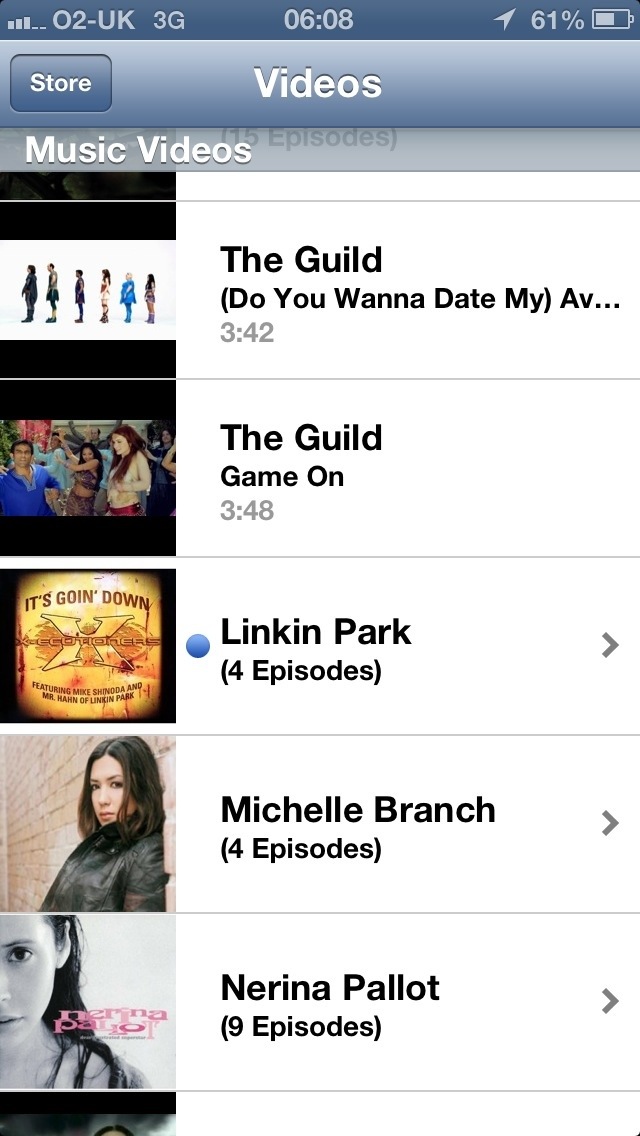 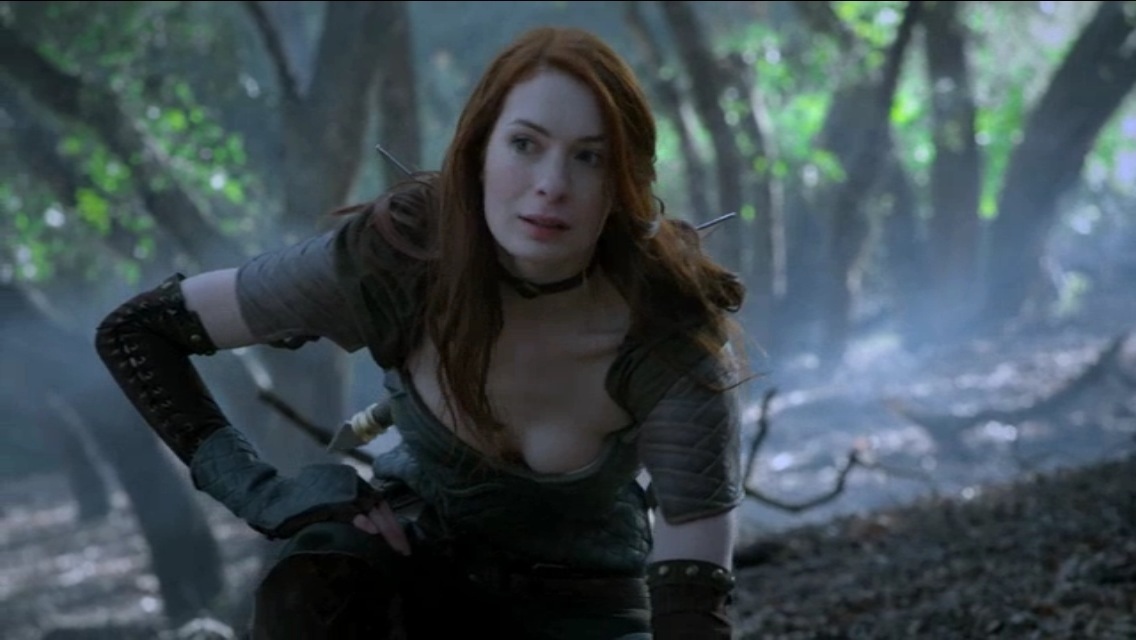 Now on to something else that according to apple does not exist or must be the users fault but since I downgraded to iOS 6 WiFi has become a nightmare in some places. At home not so much, but at work since I put iOS 6 on its not even worth turning on WiFi. Apple have denied this problem exists, and weeks in there is no fix.

Now on the the final part for today, Siri. This is the first time that I have used this, and its quite a bit of fun. Of coerce the first thing I asked it was the best place to hide a body and the answer to life the universe and everything. It is quite fun to play with and it can do some useful things here. 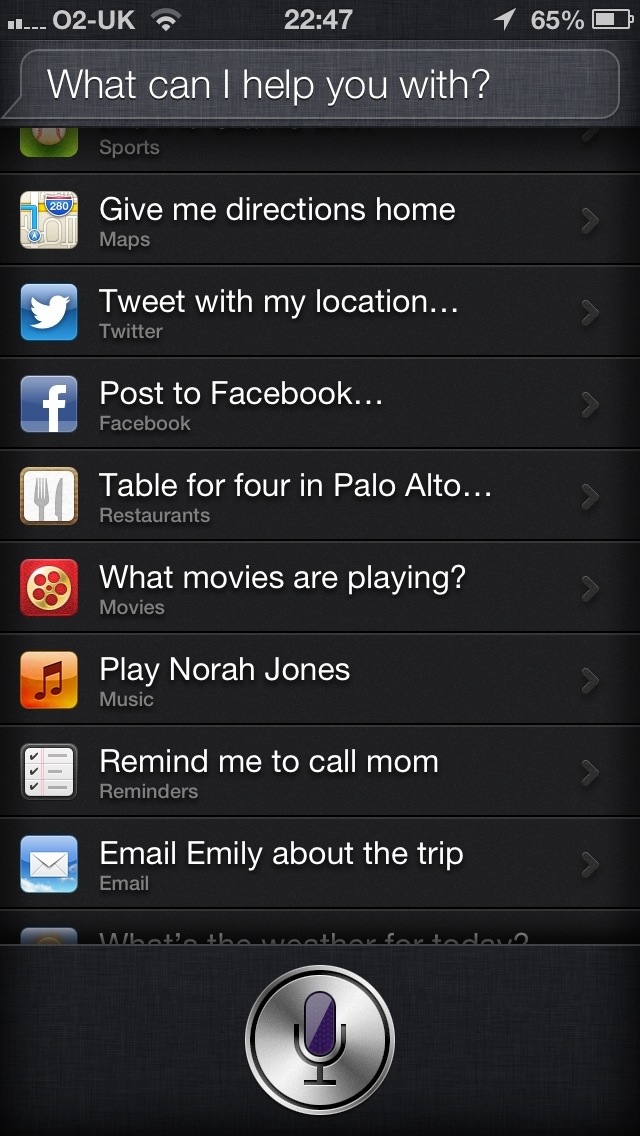 It has a little trouble understanding some or the words I say and when I set location based reminders it has a funny idea of where I live, as I asked it to remind me of something when I got home it reminded me 20 miles from my house. It’s good being able to dictate texts and tweets, notes and documents, but I’ve used it more for having fun. Here to finish off today is some examples of my chats with Siri. 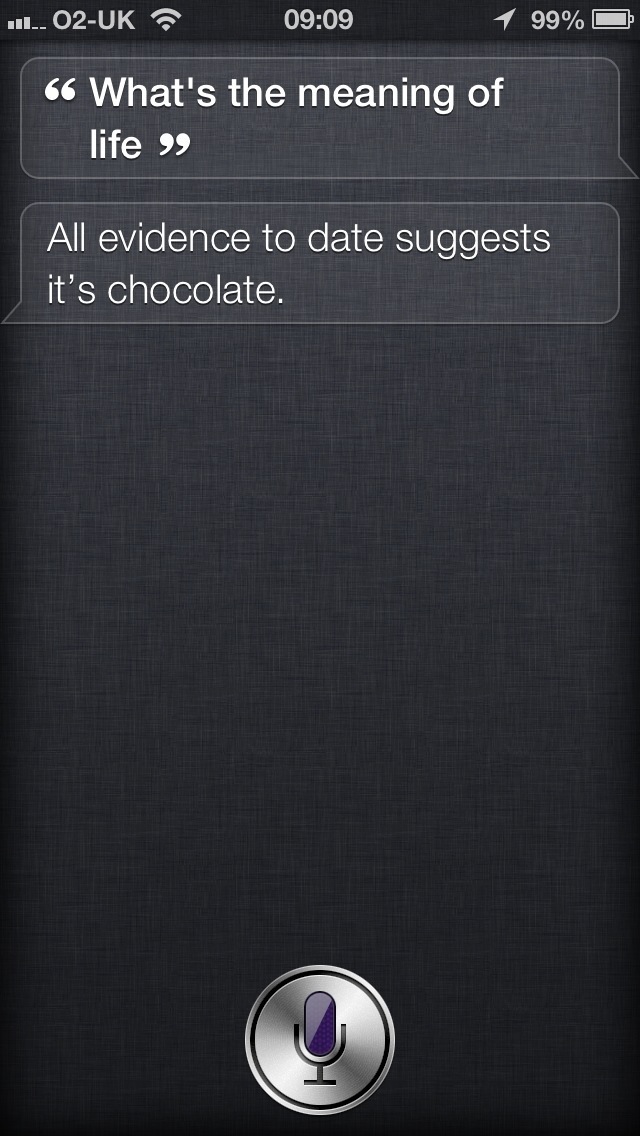 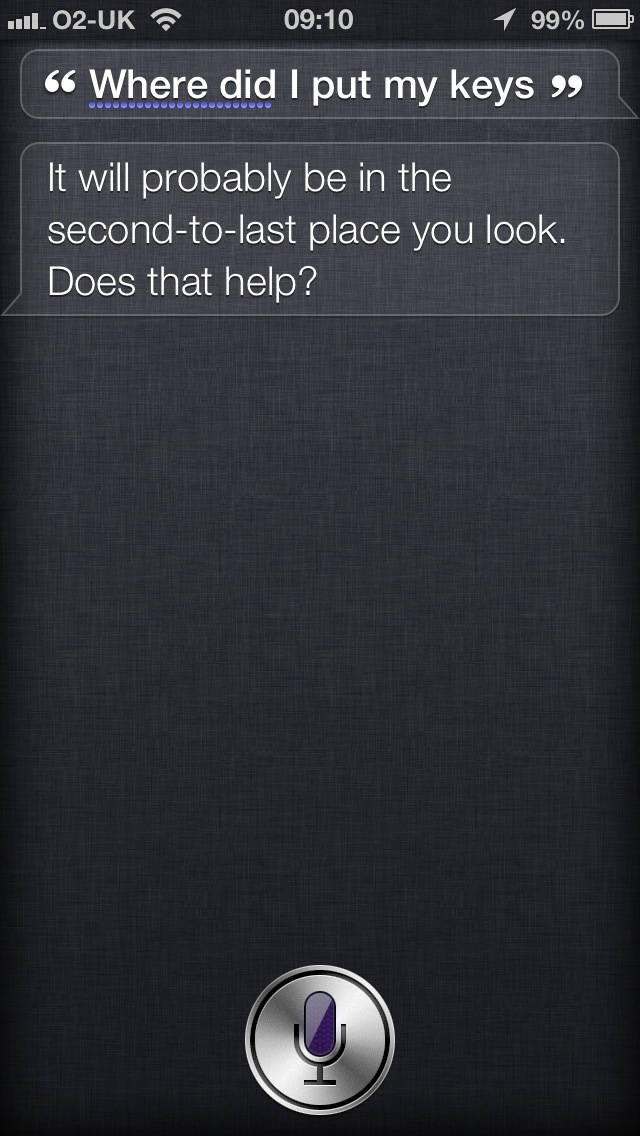 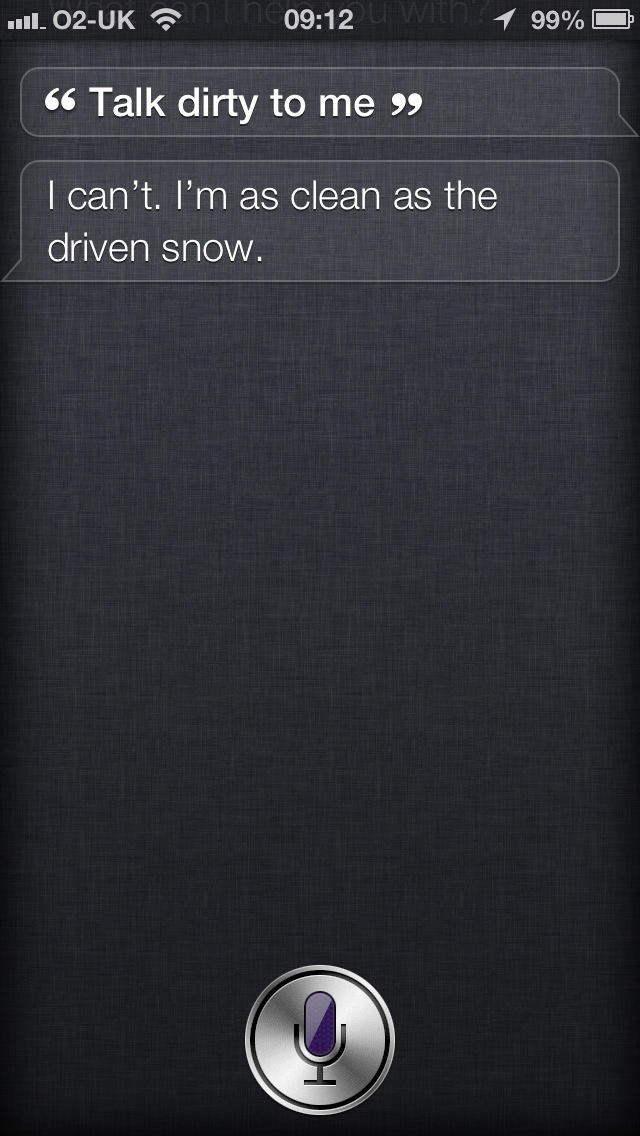 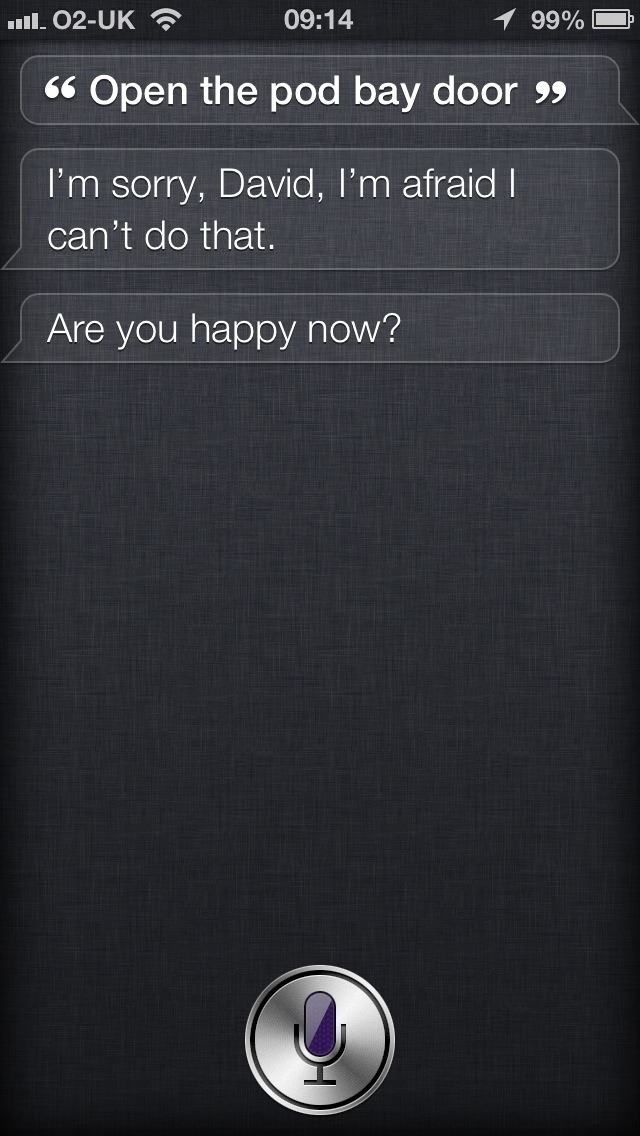 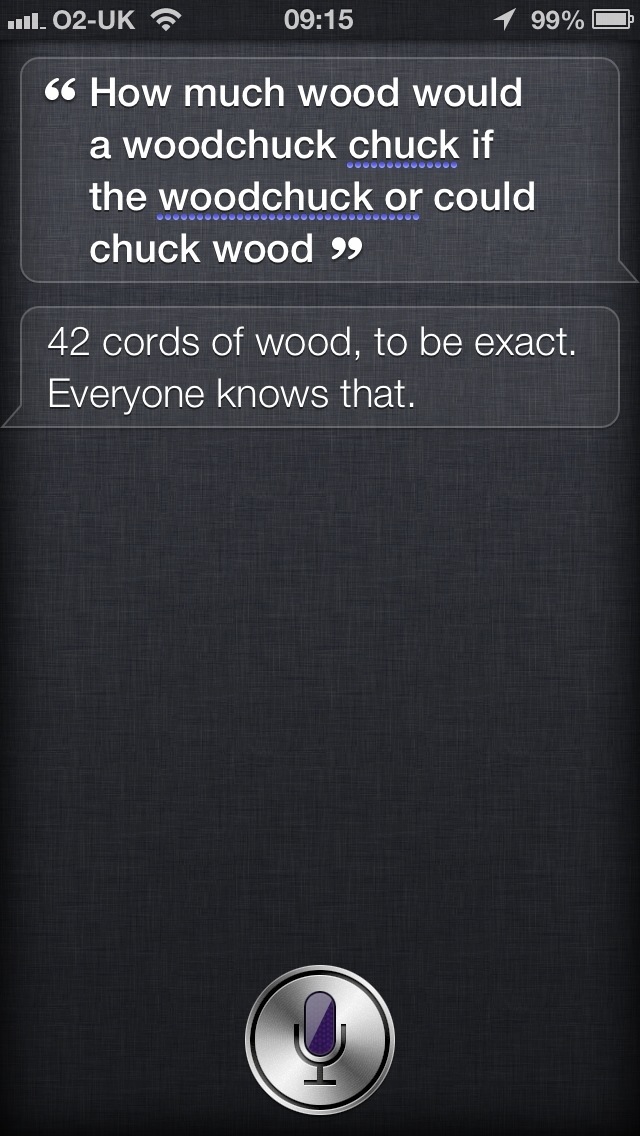 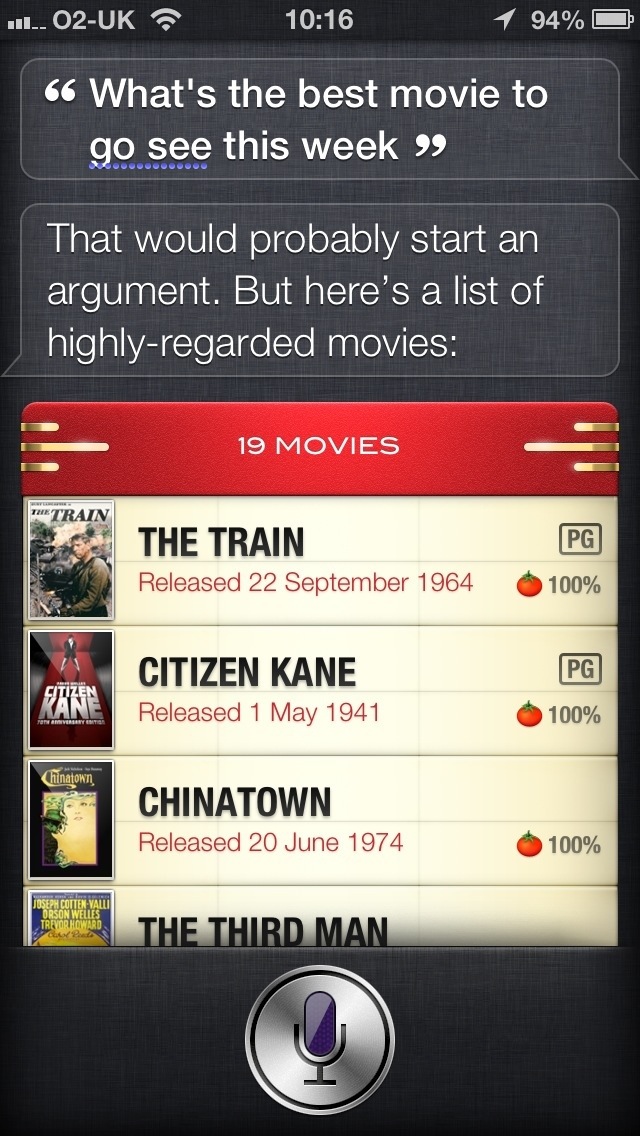 I strongly disagree with Chinatown being a good movie but The Third Man is a really good movie. That’s it for today come back tomorrow for our final concluding episode.

Greetings Space Cadets, and welcome back for part 4 of our iPhone adventure. Yesterday we looked at the some of the hardware aspects of the iPhone 5, and today we are going to look at iOS 6. Lets start with a look at the iOS 6 on the iPad2 and move on to the iPhone […]

Greetings Space Cadets, and welcome back for part 4 of our iPhone adventure. Yesterday we looked at the some of the hardware aspects of the iPhone 5, and today we are going to look at iOS 6. Lets start with a look at the iOS 6 on the iPad2 and move on to the iPhone […]